Moneyball was directed by Bennett Miller, who has very few film credits listed in IMDB.  My quick -net searches have revealed the Miller is a casual baseball fan at best, but it appears that he is interested in making biographies.
This card may not seem closely connected - but stay with me here... 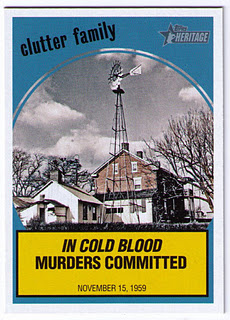 The Clutter family card above is low level on my wish list for 08 Heritage Inserts.  I swiped this image from the dormant Bargain Baseball Cards.  It is typically pretty hard to tell when a blogger stops.  Most folks don't really announce it, it just sort of happens.  Regardless the evidence that their blog existed sticks around for a while perhaps forever.
The demise of the Clutter family was documented in Truman Capote's book "In Cold Blood"  I believe ICB is considered one of the earliest works of the non-fiction novel  - A style in which the author wasn't at the events but reconstructs them as if he or she were.  This is a technique that would later be used frequently by 60/70s pop culure author Tom Wolfe is such books as "The Electic Kool-Aid Acid Test" which chronicled the acid-fueled adventures of "One Flew Over the Cuckoo's Nest" author Ken Kesey.
One my ask what this trading card has to do with Baseball or Moneyball...
Well, As a director Bennett Miller has only a couple of films under his belt, his previous big budget film was 2005s "Capote" about Truman Capote.  Miller was one of the years nominees for Best Director, an award that went to Ang Lee for "Brokeback Mountain".  The titular character in "Capote" was played by Phillip Seymour Hoffman who plays A's manager Art Howe in Moneyball.
I suppose I can mention that it is quite fitting that a posting about a man who directed a non-Baseball movie about baseball and is admittiedly not a big fan of the sport - contains very little about baseball

Moneyball 2011
Links to  previous MB 2011 posts
Billy Beane
Jeremy Brown
Michael Lewis
Michael Oher
etc
Here is a link to a Moneyball and Collecting related article in Beckett that I first saw referenced by Chris Olds via Twitter.
Posted by deal at 4:56 PM