Jeremy Brown was the 35th overall pick of the 2002 MLB draft discussed in Moneyball.  He was the fat catcher that the scouts hated with the high On Base number which Billie Beane and Paul DePodesta.
Because of compensation picks the A's had 7 picks in the first round of the 02 Draft which had 41 selections total.  Michael Lewis dedicated an entire chapter of Moneyball to the Jeremy Brown selection.  In hindsight he probably did not warrant the significant word count that he was given.  Brown announced his retirement in 2008 and his professional baseball career is likely he over.  He ended up with 10 career at bats in 5 Major League games all for the 2006 Athletics during a September call up.
Of the 7 picks the A's made in the first round Brown probably ranks in the middle.  Nick Swisher would be at the top, followed by Phillies Pitcher Joe Blanton and Mark Teahan.  The A's 3 other picks from that first round never played in the majors.  That is pretty close to the hit ratio of the 1st round picks from the 02 draft.  To Date 27 of the 41 picks in that draft have reached the majors.  For comparison the Phillies 02 first round pick was Cole Hamels.  Prince Fielder, Matt Cain, Zack Greinke, BJ Upton were all drafted in the first round - all were drafted ahead of Jeremy Brown.

Brian McCann was likely the best catcher drafted after Brown - McCann was a High School product and not likely on the A's radar.  18 players were drafter as catchers in the 2002 Draft and have played more games then Jeremy Brown.  A couple of those players made it to the show at other positions (Joey Votto, Randy Wells).  Notable to Phillies Fans is Eric Kratz who is a local product that got a chance to play for his hometown club as a September Call Up for this years squad.  Kratz was the 866th overall pick in 2002.
I haven't seen the film yet, but Jeremy Brown is not credited as a character in the imdb listing.
For the Collector
I believe Jeremy Brown only had one topps card issued in their flagship product. 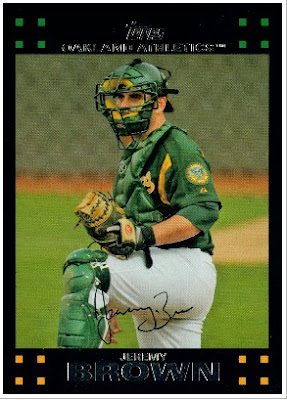 2007 Topps #624 Jeremy Brown (image swiped from baseball-simulator)
Moneyball 2011
Links to  previous MB 2011 posts
Billy Beane
Michael Lewis
Michael Oher
etc
Here is a link to a Moneyball and Collecting related article in Beckett that I first saw referenced by Chris Olds via Twitter.
Posted by deal at 8:10 AM