Understandably Art Howe isn't very happy with his portrayal in Moneyball.  Google his name and you can find a bevy of articles that all mention his complaints.

For my part I will mention that the Brad Pitt version of "Moneyball" is a Movie and is just that.  The Film is based on "Moneyball" the book, which is the work of the talented author Michael Lewis.  That being said the book is only one persons interpretation of the events.

Opinion:  There really isn't anything such as unbiased journalism - we all have our slants and opinions - Michael Lewis is an author and he is in the business of selling books.  As a narrative "Moneyball" has lots of villains - to make the story more effective it was likely best for Lewis to find a way of personifying the villain (the possibly outmoded way of judging baseball talent - scouting) as a person - In the book and the movie this is largely done in the form of A's manager Art Howe - to a somewhat lesser extent the A's scouts were also villified.

I think this works for the story, casual baseball fans, and film fans.  And isn't the audience that Moneyball is after? 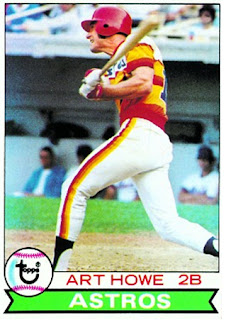 1979 Topps #329 Art Howe  (image stolen from the Baseball Card Database)
For the record, during each of the finals two seasons Art Howe was with the Athletics they 100 games.  The A's have not won a 100 games since Howe left almost a decade ago.  Howe took the A's to the playoffs during each of his final 3 seasons with the team.  In the 9 seasons since the A's have returned to the playoff only twice, Although they did win a series in 2006 under Ken Macha - Art Howe has never won a post-season series as a manager.

After leaving Oakland Howe led the Mets through a couple of mediocre seasons in 2003-04.  He was in the Rangers organization as recently as 2008 but appears to be cuirently out of baseball.
Moneyball 2011