On Janary 23rd the Year of the Dragon will commence.  Today we are going to check out some famous Baseball Dragons: 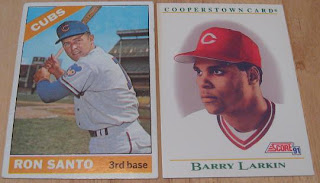 We start out with this years Hall of Fame inductees Ron Santo and Barry Larkin,  Pretty cool Larkin card - Cooperstown Collection issued 2 decades prior to his actual election.  Like Santo, Willie Stargell is also a 1940 Dragon and a Hall of Famer. 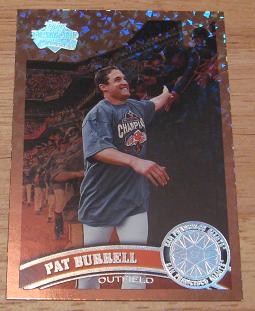 It is starting to appear as if Pat the Bat will not hook up with a team for 2012.  He had a mixed career in Philadelphia, but won a World Championship in the end and then went on to win another championship with the Giants in 2010.  Pretty nice finish.  Form Phil Randy Wolf is also a Dragon from the 1976 birth year. 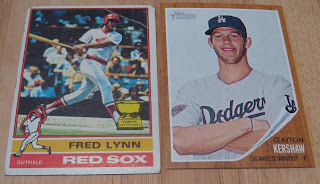 Our next pair of Dragons features young Phenoms.  Well Fred Lynn was a young Phenom when he won both the Rookie of the Year and MVP award in the same year (1975).  Clayton Kershaw is of course the reigning Cy Young award winner. Fellow Dodger Dee Gordon is also a class of 1988 Dragon. 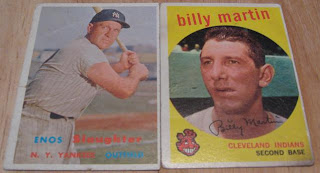 These two are both Fiery Dragons.  I picked up the 57 Topps Slaughter card out of a 3 for a dollar bin a few years back - of course that is because the back is marred to the point of being non-existent.  Billy Martin's longtime teammate Whitey Ford was also born in 1928. 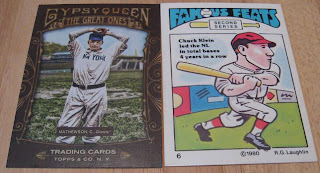 We finish with a couple of retro cards of Hall of Famers who played in the first half of the previous century.  The Mathewson card is from the Great Ones insert series of 2011 Gypsy Queen.  Chuck Klein comes from a 1970s Fleer issue.


1964 Dragons
I just wanted to note that the 64 Dragons are quite the PED class and include Canseco, Palmiero, and Bonds.