Swag from Nachos Grande - Tier One plus A&G nno

Still catching up on postings - Last month Nachos Grande ran a Tier One Group Break.  Here is the good stuff. 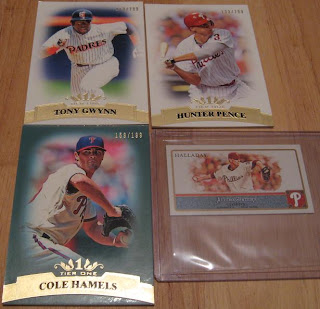 Tier One as the name states is a Tiered product with several parallels.  The break was of the 15 team variety where you get a team you choose plus one at random.  My random squad was the Padres - Tony Gwynn is about as well as I could do personally for a Padres base card as he is one of my favorite players.  The Pence Base card may be my first of him as a Phil.  The Hamels was my best pull from the Tier One portion of the break. 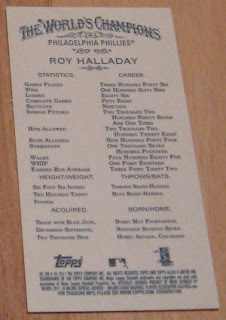 Nachos Grande had won a box of 2011 A&G and he through cards from that box that he didn't need for his PC into the break.  Fortunately one of those cards was arguably the best card in the box.  A No Numbered Roy Halladay Mini.  This is only my 2nd nno mini.  I have a Cole Hamels from a different break I was involved in a few years back.

Chris also gave each participant a team set of 2011 Topps Lineage, so in addition to the above cards, I also picked up the Phils and Padres Topps Lineage cards.

Right now over at Nachos Grande a group break featuring 5 turn of the century products. Phils from that era aren't not nearly as exciting as the current crew - maybe pick up a couple of cool Scott Rolen cards.
Posted by deal at 8:55 PM