We are taking this moment to take a look at a Phillies outfielder that has something in common with Mr Manning. 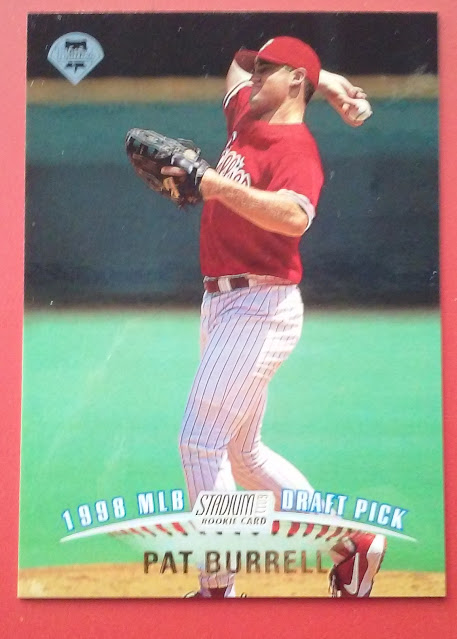 Within a few months of each other Peyton Manning and Pat Burrell were both draft first overall in their respective sports.

Burrell is one of twelve Draft Pick Cards that run from #149-#160 in the set. The Dozen cards are all RCs, none of which is more significant that Burrell. The subset does include another Phillies Draftee, Eric Valent.

SABR
I have been a Member of SABR (Society for American Baseball Research) since 2013 when the National convention was hosted in Philadelphia. This past weekend I gave my first presentation in front of the local SABR affiliate the Connie Mack Chapter. The subject was the success rate of #1 Overall picks in the MLB Draft.

The Phillies are drafting #1 for the first time since the Burrell pick in 1998. I was interested in finding out what the success rate of #1 Picks have been across the history of the draft. I found close to 3/4 of all #1s achieve at least one +2.0 WAR season. A more substantial single season +5.0 WAR season was achieved by a much more modest 1/3 of the candidates. Number Ones reached the playoffs at a rate of 65% of which just short of half (31%) reached the World Series.

In terms of these numbers I judged Burrell a success. His peak WAR was +4.5 which is substantially more that the +2.0 WAR of a pedestrian starter, but not quite an All-Star level of +5.0. However, more importantly to me as a Phillies fan he was among the 31% that reached the World Series and also the 23% that took home a ring.

The powerpoint slides from presentation are below, They are tough to follow without the commentary, but it gives you an idea what I was attempting to learn about the #1 pick.