Annually we here at Team Phungo attempts to put a year long feature dedicated to a single team. Past editions of the Phungo Annual have included the 1964 and 1983 Phillies as well as a feeble attempt at the 1915 NL Pennant Winners last year.

This year we are going with a different type of feature. 2016 Marks the 40th anniversary of the Bicentennial All-Star Game which was held at Veteran's Stadium in Philadelphia. To mark the occasion we are going to put together several postings related to the event. I don't anticipate hitting every player that made the team but if I am going to cover a good chunk of them we are going to have to start now..

And we lead off with a Clean Up Hitter. 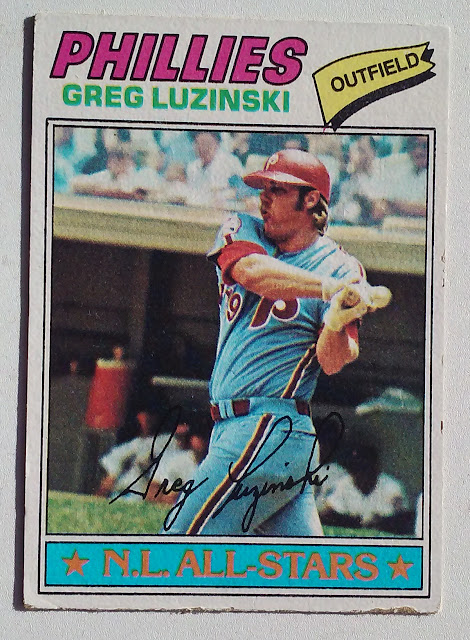 Five Phillies made the 1976 NL All-Star roster but only one of them got to start the game in his home city. Greg Luzinski played Left Field and batted fifth, unfortunately he went 0-3 in the game. It was the second All-Star appearance for the Bull and His first of three consecutive starts in the mid-summer classic.

Luzinski's All Star Game qualifying resume at the break included a slash line that read .307/.360/.502 with 12 Homers and 57 RBIs. His All-Star campaign continued as the Bull finished 8th in the 1976 MVP voting.

SABR Star?
Despite the impressive power numbers mentioned above Luzinski's 1976 WAR was +2.3 which ranked a pedestrian 40th in the NL and 19th among outfielders. In general Greg Luzinski's defensive shortcomings probably would prevent him from being a SABR star in any given year. His Peak WAR was +5.2 in 1978 which was 11th in the league and 5th among outfielders.

Regardless he was a slugging machine over his four year all-star period running from 1975-78, averaging 32 Home Runs with 112 RBI while maintaining a .295 BA and an impressive 150 OPS+.

1977 Topps
The starters for the 1976 All-Star teams are honored in the following years Topps set so if I follow through with this feature plan on seeing plenty of 1977T AS cards. This is my favorite type of All-Star card, take the base card and add a flair to them - In the case of 1977 it is more fo a banner, but still solid. During our 1976 ASG redux, I am going to try and hit a few different years and I am sure the relative merits of the different flairs will be over-analyzed.

Lots to like about the the image on Luzinski's card - The All-Star flair, the powder blue road uni, and The uphill dugout roof that draws the photo focus to the Bull's powerful swing. Luzinsnki's uniform #19 appears to be inked on the bat knob - there is a patch on his right shoulder not sure but it may be a bicentennial patch. A final note of interest is the shot appears to be taken at Shea Stadium where Luzinski made his MLB debut on September 9 1970. 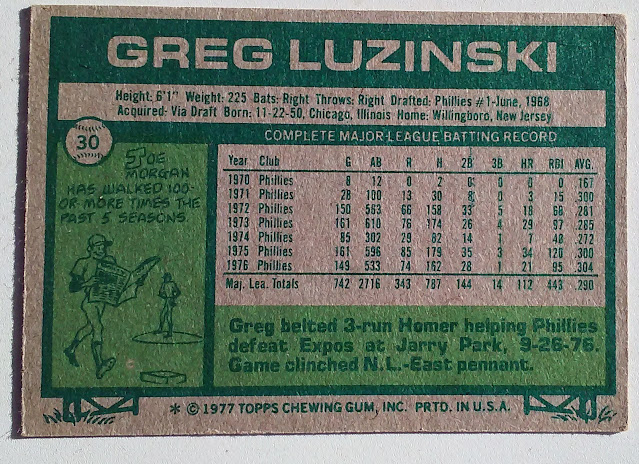 The text on the back of the card refers to the Phillies 4-1 NL East Clincher. Luzinski's two out 3-run homer broke a 0-0 tie in the 6th inning. The Plate Appearance had a +34 WPA, which was the best in the game.

Something tells me we will be hearing from Joe Morgan later in the 1976 All-Star Game feature - he would extend his 100 Walk Season streak to 6 in 1977.

Other Voices
I am sure we will be checking in with The 1977 Topps Blog numerous times during this series. The posting on the 1977T Luzinski card can be found here.