Taking a break from the recent run of Vintage Card postings to note the beginning of spring training play. 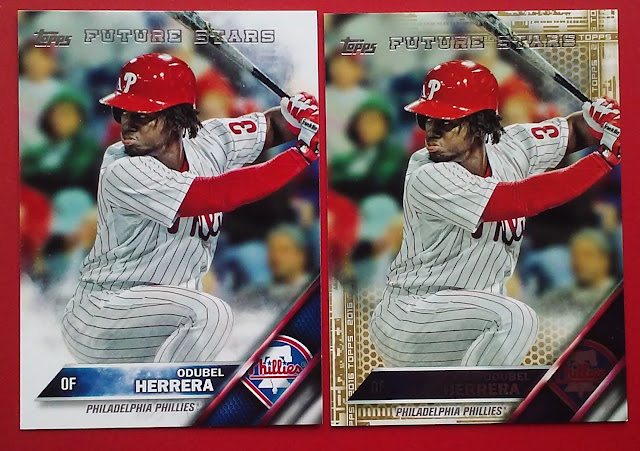 Pitchers and Catchers have been in camp for a couple of weeks and today the Phillies played their first Spring Training Game, a 5-3 loss to the Toronto Blue Jays.

Results be damned, we are happy that ball games are being played and to acknowledge that fact we present Odubel Herrera's 2016 Topps Card.  A fine image here, Odubel is captured with his extreme leg kick. This may have thrown off is timing a bit during a mid-season slump, but the Rule-V pick made adjustments and got back on track. The perseverance paid off with a fine debut season .297 BA, 8 HR, and surprising +3.8 WAR.

Getty the Game
A Getty Image search of "Odubel Herrera" returns eight pages of pictures. I found this image on about page 5. The Photois from a Phillies 6-1 Loss to the Marlins on April 22 2015.

Typically you can count on Getty to give you date and location for a photo. For Odubel they provided the the bonus of telling us that the shot was taken during the sixth inning of the game. Odubel was facing Marlins Pitcher Jared Cosart in the AB and worked a full count before grounding out 5-3 (Martin Prado/Mike Morse). For the game Herrera was 1-4 with a single a K and one HUGE error.
In the Top of the 8th with the Phillies trailling 2-1 the Marlins Dee Gordon batted with the bases loaded. Herrera misplayed a ball hit deep to center which led to all 3 runners scoring and Gordon landing on 3rd. The 2015 Phils chances of scoring a run in the final 2 innings were bad, scoring 4 was near impossible.

The game was just another in a long line of wasted quality starts for Cole Hamels who went six innings and gave up only 1 run (unearned). The Phillies lone run was scored on a Cody Asche Homer.

According to Getty the picture was taken by Philadelphia based photographer Hunter Martin who you may remember from our Phungo Games posting on the 2014T Chase Utley card.

Notice I modified "Guess the Game" to "Getty the Game" which to me more accurately reflects the task of scrolling pages of images than making an educated guess at a box score.

2016 Topps
This pair of cards came in the swag from a recent Nachos Grande grouper. The Gold cards are numbered to 2016 this year, this one is #1308. Opened a blaster of 2016T and this is still the only parallel I have seen live. I am not a fan, but I give Topps credit for trying something different with the GOld Cards this year. Perhaps the straight gold looked hideous in the smoky corners and the grid gold was the best they could do. I am curious what they are going to do for a parallel heavy set like Chrome. I will give them an "NT" for the 2016 Gold Cards, that is my short hand for "Nice Try" which is how I would abbreviate a good but failed attempt by a fielder when keeping score. Shortstop makes a diving play to his Right gets up fires the ball to first, just missing the sprinting runner. Put it down as an Infield Single NT-6 (Nice Try - Shortstop)