We have a lot going on with our Sunday Night Baseball posting this week.

ESPN is back in New York for another Red Sox v Yankees match up. The Big Apple venue gives us a chance to discuss one of the sadder of our 1976 All-Star Game subjects, Jim "Catfish" Hunter. 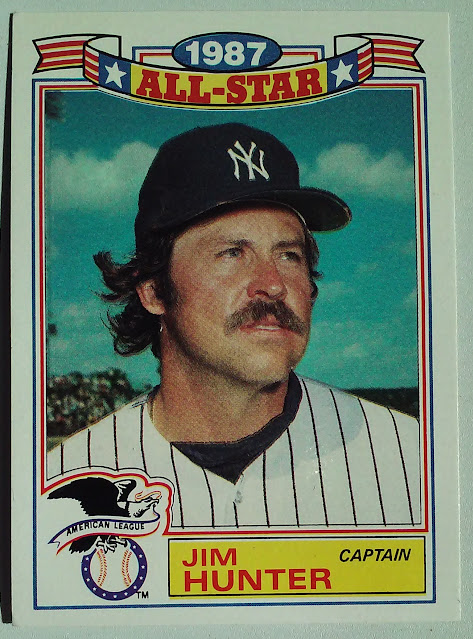 The 1976 All-Star game was the final of Catfish Hunter's eight appearances on the Mid-Summer Classic Roster. He represented the A's six times and the Yankees twice.

Overall 1976 was a mediocre season for Catfish, his ASG roster spot was earned with four consecutive top-4 Cy Young finishes in the seasons prior. His 1975 Cy 2nd included leading the league with 23 Wins and 30 Complete Games. His the most recent player to break the 30 CG mark and will probably be the last of my generation

Hunter was the 2nd AL pitcher to take the mound in the 76 ASG. He pitched the 3rd and 4th innings giving up a pair of runs on a 2-run bomb by Reds Outfielder George Foster. Hunter faced 3 HoF players in the two innings:

So really he faced only 2 HoF Hitters, we are being precise here - blogging is important.

The sole Phillies batter he faced was Greg Luzinski who flew out to Left.

1988 Topps All-Star Commemoratives
Picked this card because Catfish was not issued an All-Star card as a Yankee during his playing days.

The 1988 Topps Commemoratives which were placed in rack packs included two 1987 ASG Honorary Captain cards. Hunter represented the AL while Billy Williams received the honor for the NL. The two were inducted into the Hall of Fame later that summer.

Sloppy Topps
Details kids, the 1987 All-Star game was held in Oakland and Catfish wore the colors of his original team the A's for the occasion.

Catfish Hunter All-Star
Catfish Hunter spent his entire career in the AL during an era when the NL dominated the All-Star Game. The Junior Circuit lost all eight games in which he was on the roster, and truth be told he didn't help the AL very much.

Hunter pitched in six of those eight games including a fine performance in his first ASG in 1967. The game went 15 innings and Catfish pitched the final 5. Hunter only gave up two hits through his first four innings, unfortunately he gave up a Home Run to Tony Perez in the 15th.

The games outcome is noted in the -toon on the back of Hunter's 1969T card.

In today's terms giving up a run in an All-Star game seems about average, the cartoon neglects to mention that the single run occurred in an outing that went 5 innings.

And an Anniversary
Turning our attention to the text, the card mentions Catfish Hunter's No Hit Perfect Game. Today happens to be the anniversary of that Perfect Game a 4-0 A's victory over the Twins on May 8 1948. Hunter's 1969 Topps card is the first one issued after the game, therefore the first of his cards to include the words "Perfect Game". I imagine that prior to this card the only Topps Cards that mentioned "Perfect Game" were dedicated to Don Larsen, Jim Bunning and Sandy Koufax.

According to Baseball-Ref Catfish Hunter made $23,500 in 1968. Assuming that is his post bonus number, the $5,000 raise mentioned on the card is an increase of 27%. The US Department of Labor Inflation Calculator estimates that five grand is the equivalent of $34,000 in 2016 Dollars.

Here is a look at the front o the card

Hunter's other ASG appearances were all mediocre at best