Last night with Cubs featured on Sunday Night Baseball we featured a Rookie Cup card of Hall of Famer Ron Santo. Tonight we feature one of the Phillies representatives from the same Topps Rookie All-Star squad that featured Santo. 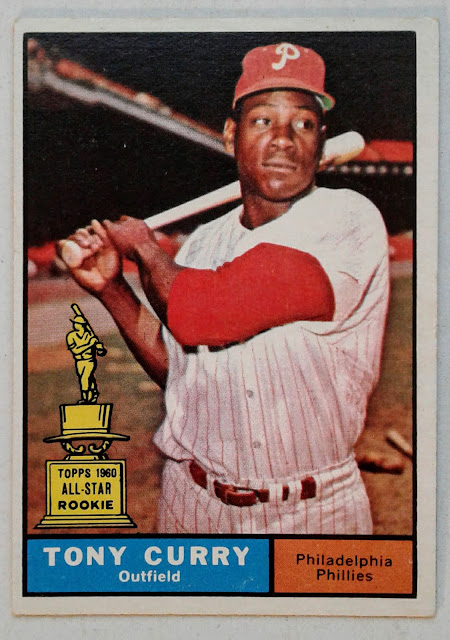 Tony Curry was the second player born in the Bahamas to reach the majors (following Andre Rodgers 1957). Curry had a decent debut with the Phillies batting .261 with 6 Home Runs in 95 games. Unfortunately those would be the only six Homers that Curry would hit in the major leagues.

Due to a contract dispute and personal issues Tony Curry would only play 15 games with the Phillies after his rookie season. Prior to the 1962 season he was traded to Cleveland and would only return to the majors one more time for a brief stint in 1966. 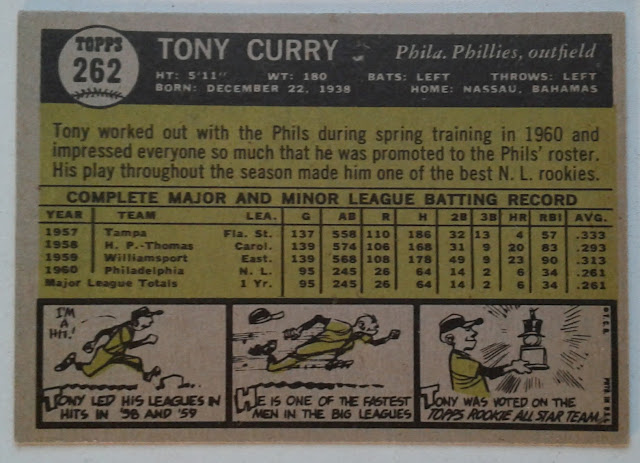 A few notes on the cartoons. I want to start on the last panel first. As mentioned in our Ron Santo posting yesterday, of the 10 Rookie All-Star cards in the 1961 Topps set seven of them have cartoons that mention the Topps award. Next I want to go to the middle frame. I realize those were different times but "One of the fastest men in the Big Leagues" stole a grand total of ZERO bases in his major league career. Minor league records are spotty but baseball-reference lists Curry's single season minor league high as eleven stolen bases.


1960 Topps Rookie Cup All-Star Team
This column will serve as an Index of our postings related to the 1960 Topps All-Star Rookie Team. The players were honored with cards in the 1961 Topps Set. Here is a checklist of the 1960 hoorees