It would not be a stretch to say that I learned math from the back of baseball cards, nor would it be any further from the truth say that Jim Bouton taught me how to read.

Tonight the Yankees are visiting the Cubs on Sunday Night baseball, while this week the Phillies will host a rare series with the Mariners.

The player I have chosen to tie together these two series is Bouton. 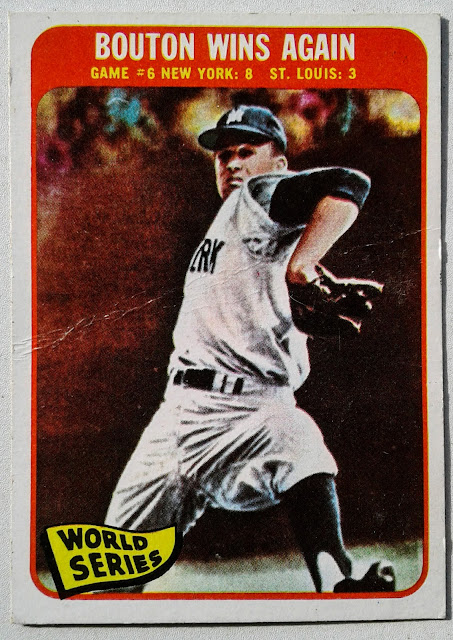 Bouton is remembered for two careers. The first was as a baseball player in the New York Yankees organization. His other career was as an author while employed by Seattle's first MLB tenant the Pilots.

The card above is from an eight card subset (#132-#139) in 1965 topps. Each of the first seven cards in the set represents a game in the series. Card #137 above speaks to game 6 which the Yankees won 8-3 behind Jim Bouton's strong pitching and a trio of Home Runs by Roger Maris, Mickey Mantle and Joe Pepitone. 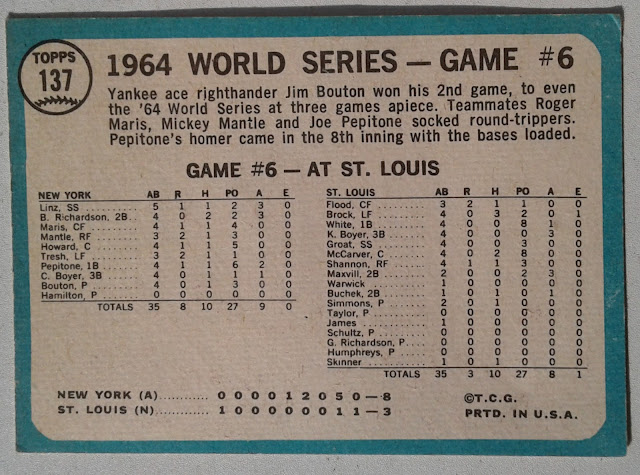 The B-side gives a detailed box score which includes fielding stats but ignores RBIs (early SABRmaticians no doubt). In addition to the box the card text provides a concise synopsis of the games events.

After 1964 Game 6 the Yankees would not win another World Series game until 1977.


Ball Four
Jim Bouton is going to one of the guest speakers at this years SABR convention in New York City. In Preparation for the event I have just begun reading "Ball Four" for what I believe is the 3rd time. I first encountered the book when I was in my early teens. I re-read the book as an adult, probably in my 30s and now approaching my milestone 50th birthday I am giving the work a third pass.

I will always enjoy the anti-establishment humor of "Ball Four" and am looking forward to this reading.

I anticipate this will be my most enjoyable session with the book. Through my rediscovery of baseball cards I have become more familiar with the players and stories from the "Ball Four" era, hopefully this re-read will generate some fun posts.

May 7 1969
In his entry for May 7th Jim Bouton mentions a disagreement he had with manager Joe Schultz over his role on the team. Schultz (as well as pitching coach Sal Maglie) wants Bouton to mix in more fastballs and curves with his knuckler. Bouton counters that Phil Niekro throws mostly knuckleballs. The ensuing argument devolves into a petty negotiation over Niekro's pitch selection.

That day Seattle lost 5-4 to Boston in a game that did not involve Bouton. Red Sox Shortstop Rico Petrocelli had a Home Run for the victors. 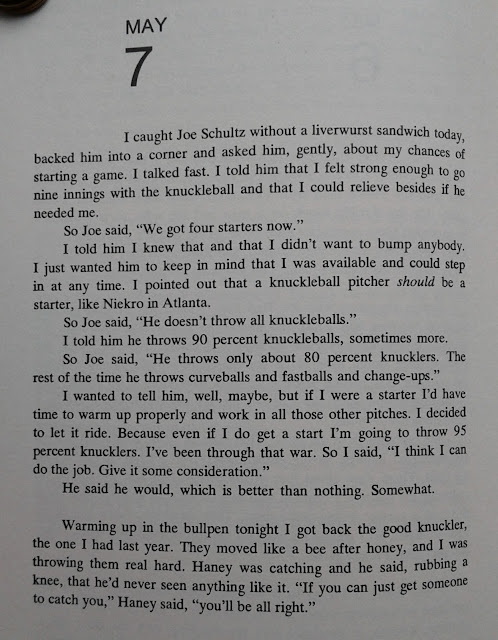 I just bought the Simmons Auto from Topps Archive