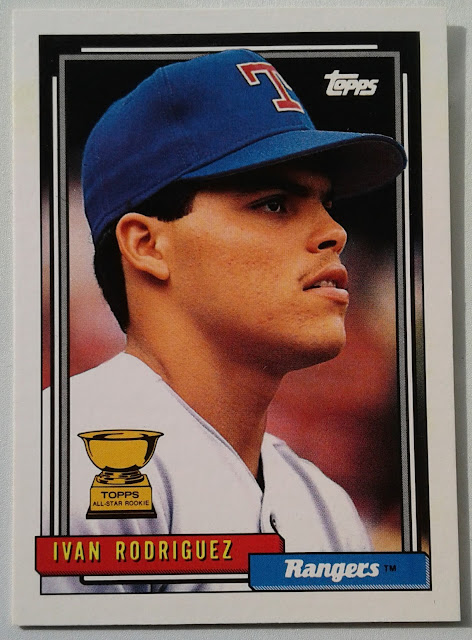 Twenty-Five Years ago Ivan Rodriguez made the 199 Topps All-Star Rookie Team. In 88 Games he batted .264 with three Home Runs. The numbers were good enough to rank 4th in the AL Rookie of the Year voting which was won by Chuck Knoblauch.

Pudge spent the bulk of his 21 year career with the Texas and he will be the first player enshrined in the Hall of Fame with his primary team listed as the Rangers. He is also the Franchises first rep, as all the Senators inducted are from the DC->Minnesota squad.

Rodriguez was selected for the Hall in his first year of eligibility, although his 76% tally was just one point above the 75% Hall of Fame threshold. Regardless it puts Ivan Rodriguez in the inner circle of Hall of Famers. Of the 15 Catchers in the Hall, I think he and Johnny Bench are the only two to get in on the first ballot.
Catchers are surprisingly under-represented in the Hall. The are 15 Backstops enshrined, which is the lowest of any Batting position other than 3rd Base. ﻿ 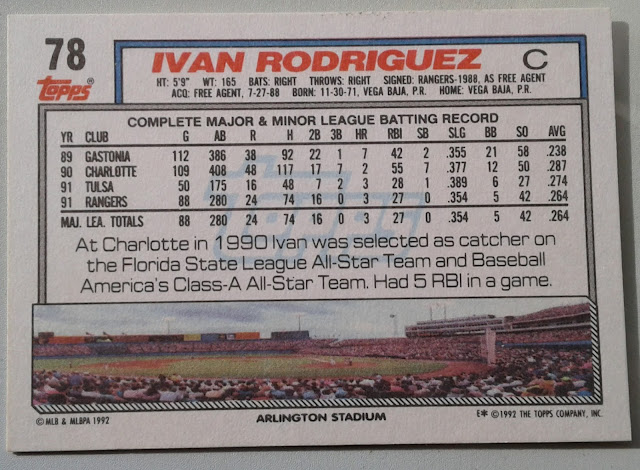 I was to lazy to look up a Box for the FSL All-Star game referenced, perhaps I will add it to this posting in the future. I like the fronts of 1992 Topps, but I am not a fan of the wasted space on the back. Do we really need the same picture of the stadium for every player on the team? It is a pretty dumb concept when you think about it, I mean how do you capture a stadium in basically a landscaped thumbnail.

It's a pretty nice looking card. Speaking of catchers, I just finished reading a biography of Yogi Berra. Can you believe he didn't get voted into the Hall on the first ballot?