One of the reasons Richard Weisman picked Tom Seaver for Andy Warhol's Athlete's Series is that he was the ballplayers proximity to New York would make it easy to set up a portrait sitting at the artists studio in Manhattan.

On June 15th of 1977 the Mets traded Tom Seaver to the Cincinnati Reds. I am not going to go into the ugly details that led up to the trade, I will only note that the Mets-Seaver relationship did not end on friendly terms.

As we noted earlier despite the trade Seaver was able to sit for the Warhol portrait when he retuned to New York for the All-Star Game. Within the Warhol Diaries there is an interesting anecdote about the Seaver and the Mets.

The first passage discusses how much Andy Warhol appreciated Seaver and Athletes in general, The 2nd and 3rd portion get to our "Tale of Two Caps"

This is a mere month after Seaver was traded by the Mets and he was still angry with the club. What Andy relates here...

"He hates the Mets now. He'd just bought a new house in Connecticut and everything when they traded him"

Is so brutally honest. It isn't really new information. Anyone familiar with the Mets or Seaver knows the details, but it is interesting seeing it from a non-baseball perspective.

The wound was still raw for Seaver and clearly his feelings towards the Mets left an impression on Warhol. It is the kind of thing a perceptive artist who only sat with his subject for an hour may find out that a reporter with a microphone may not. 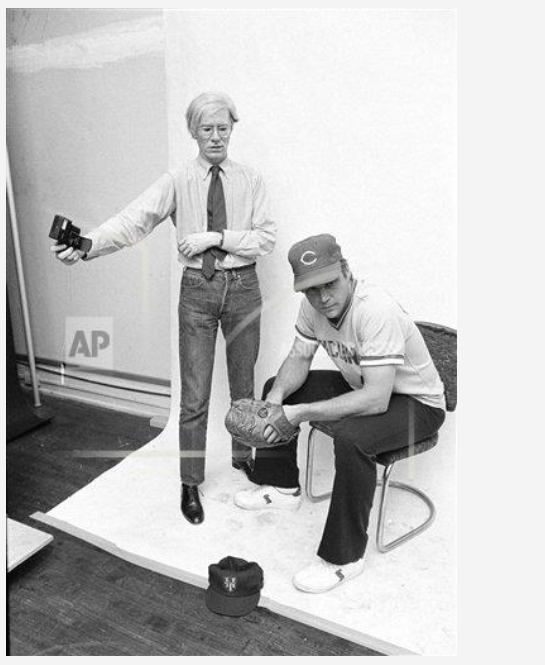 We have Andy photographing Tom wearing a Reds cap, but then we can look down and THERE IT IS! The Mets Cap that Tom Seaver refused to wear for this portrait sitting.

Fortunately for Tom Seaver and the Mets, they have resolved their differences. Tom Seaver's #41 is retired by the club and can be seen on the walls at Citifield