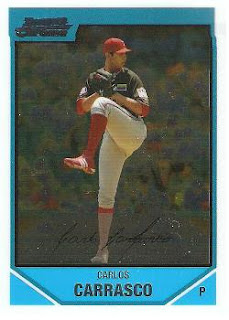 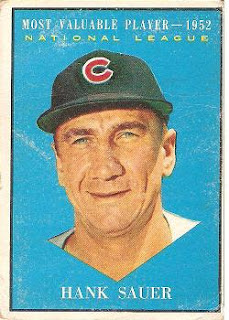 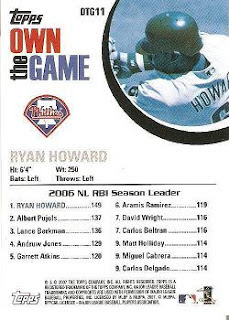 The World team captured the 2008 All-Star Futures game by a 3-0 score. Nine pitchers combined to shutout the USA Squad on only 3 hits. Che-Hsuan Lin, a Low-A Bosox prospect, from Taiwan captured the MVP trophy for the game by collecting two hits including a 2-run Homer into the left field seats. A's farmhand Henry Rodriguez (Hi-A) also excited the crowd by firing several pitches in the Hi 90s and topping out with a handful at 100 MPH.

Plus - The oft-questioned Phils minor league system, sent 4 prospects to the futures game. Carlos Carrasco playing in his third futures game earned the W for the world team pitching a scoreless first where he struck out 2 and got a broken bat grounder to retire all three batters he faced. One of the three US hits was by Jason Donald.
The game was attended by an estimated 20,000. This was so few that we were able to sit in section 7 behind home plate.

Minus - Of course I paid the full price of $75 for my tickets instead of the $20 I could have easily gotten away with.

Hopefully the performance of Team USA is not indicative of what they will do in Beijing. According to the NY Daily News only two of the world players were expected to represent their native countries in the Olympic games.
Shenanigans - According to Topps Ryan Howard is an "Own the Game" caliber player, unfortunately he does not own enough of it to make the All-Star team. This is despite the fact that he leads the league in both Homers and RBIs. To find the last RBI/HR leader at the break to be a non-star you have to go clear back to Hank Sauer in 1948.

BlogBlogBlog - Baseball America is always a good place for Futures Game Coverage.
BlahBlahBlah - Apparently Jim Leyritz is bent out of shape about not being formally invited to participate in All-Star festivities. Not sure if DUI related manslaughter charges have anything to do with the Yankees oversight.
Off the Diamond - Team Phungo stuck around for the first inning of the celebrity softball game. Wade Boggs Homered in the first AB for the AL/Yankees squad.

This was my third and most likely final trip to Yankee Stadium. I am not a Yankees fan and did not go to enough games for the stadium to have any particular memories for me, but I did enjoy the handful of trips I made to the House that Ruth Built.
Scoop - According to a Phungo source Pat Gillick was spotted at the Futures Game sitting w/ Yankees GM Brian Cashman.
Useless Info - Spotted hungry autograph hounds outside of the Inter-continental @ 48th & Lexington.
On Deck - Next game on the team Phungo slate is a Phillies road game @ DC scheduled for 7/31, but I would think we will try and squeeze in a game or two between now and then.
Posted by deal at 8:37 PM

Best place to get autos at Yankee stadium is 3 hours before the game at the players entrance or as the gates open, go down the 3rd base line, towards the corner and usually you can get some of the guys to sign.

Thanks Michael, and how bout next year at the new Yankee Stadium?