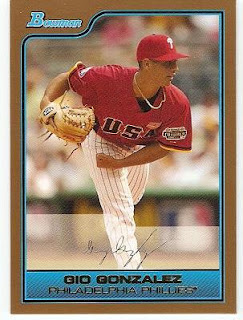 The top teams in the NL Central get CC Sabathia and Rich Harden. The Phillies Get Joe Blanton?

I can't get excited about this deal. In general Pitchers from the AL can expect to do better in the NL because of the no-DH, however Oakland is a huge park which benefits pitchers. I have grave concerns about Blanton's transfer to Citizen's Bank.

And what does this have to do with Gio Gonzalez. It seems like the Phils can't get away from this guy. First It comes over to the Phils in a deal that leaves the Phillies paying 7M dollars a year to hit home runs for the Chicago White Sox. Then he ends up being half of a deal back to the Chisox so the Phils can pay Freddy Garcia 10M to mend a busted arm - How much better would the Phils look right now with Floyd and Gonzalez in-house? Now the A's have to make room for Gio to start so they somehow get 2 prospects out of the Phils for a #3 or #4 starter.
Posted by deal at 9:26 PM

I just came across your blog from a comment you made on another blog. I'm a Philadelphian living in Houston but still a Phillies fan. I've got a blog at www.capewood.blogspot.com. I feature a lot of Phillies cards and some non-baseball card stuff. Hope to see you there.

I'm not too excited about Blanton either.