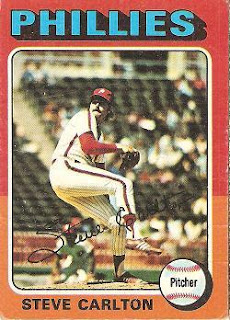 I am going to be featuring a couple of posts this week on some of the cards I picked up at Concord Mall card show last weekend.

I was very pleased with the show - the 2.5 hours I allotted myself was clearly not enough time.

I spent the bulk of my time filling in some Phillies cards - both recent and 70s vintage as well as 50s vintage and 60/70s HOFs.

Today I will feature some of the 70s cards. At the top of this post is a 1975 Steve Carlton card which was in small batch of Phils cards that I picked up for 25 cents a pop. There was a dealer there that had tons of off-condition vintage dating back to the 50s all at a buck a card. This Greg Luzinski Rookie Card was among the cards I pulled out his stash. We all know that Luzinski had a great career with the Phils and has lent his name to one of the Phils marquee concessions in their new ballpark. Scott Reid's baseball career was significantly different - He appeared in 38 career games for the Phils in 1969 and 1970.

In two separate purchases I picked up both Ollie Brown cards from the Topps 1975 set. 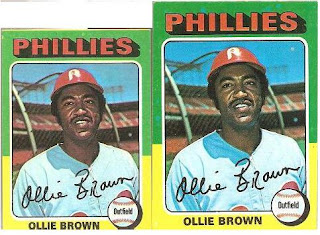 
Topps offered a miniature version of their 1975 set as well as the regular sized version. I really like the minis and tend to pick them up whenever I see one, definitely if it is a Phils player. The 1975 is a fairly iconic set and I wonder if I would like the minis as much if they were done for a less notable set like 1970 Topps. The Mini came from the same quarter bin as the 75 Carlton above. The base card came out of a dime box.

As I mentioned above the Luzinski dealer featured tons of vintage cards a at dollar a piece. Among the were these two early 70s gems. 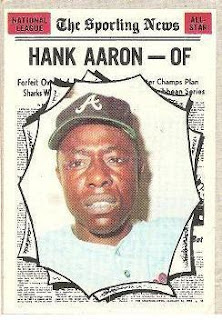 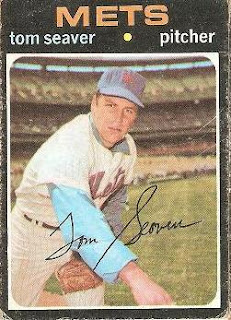 To me any Hall of Famer from prior to 75 is worth a buck especially for top tier HOFs like Aaron and Seaver. If you are looking for big time stars of the era, the All-Star cards are always more affordable then the base. I like almost any newspaper themed cards so the 70s All-Stars are among my favorites.

Tom Terrific is a Met, but it isn't often your going to find a card of his from the early part of his career for only a buck.


A few weeks back Dayf posted a vintage Falcons insert card to mark one of the teams victories. I had remembered similar Hockey Cards from the 70s. As luck would have it I found this beauty in the dollar bin. 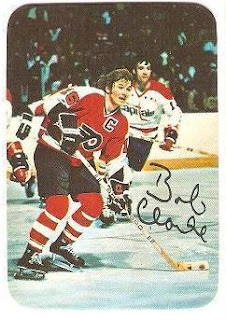 Both OPC and Topps issued this insert set which came 1 per pack in each manufactures 1977+ set. The insert apparently also comes with square corners, I have only seen the rounded corners as pictured here.

That concludes the 70s era portion of the Concord Mall Card Show. Hopefully later in the week I will get a chance to post some of the 1950s topps cards that were available.
Posted by deal at 9:36 PM

Nice. I miss card shows. They were fun times. :(