Yesterday I made the somewhat impulsive decision to take my girlfriend to the final home game of the Phillies 2009 Season. Turned out it was the right decision.

Last year I got to go to a game, but couldn't get another ticket - it was great to get a second chance and be able to share the experience with her.

Several things fell together so that we could make it to the game.

1) Unfortunately the Phils fell to 1-3 in the Series - however, this resulted in the ticket prices for game 5 falling to a level which I only felt moderately guilty about spending.

3) I wasn't all worn out from my typical weekend of excessive decadence.

4) This is absolutely key - The Phils had a favorable pitching match-up and this definitely factored into the decision.

It took the confluence of all the events just to get us to make the decision to go.

I monitored prices on Stubhub till about 1p and made a purchase of one of the last pairs of tickets in a section which I considered both good enough and affordable.

We were in the upper level but got to sit behind the plate. That is good enough for me and fits my budget.

The game got off with a slight hiccup but Chase Utley straightened that out in the bottom of the first with a 3 run homer. Utley would add a 2nd dinger a few innings later to give him 5 in the series and tie Reggie Jackson for HRs in a single World Series. Cliff Lee had a good almost great outing. The Phils dicey bullpen gave us a scare, but in the end the Phils Won 8-6.

It was a great experience. The Phils faced eliminations and lived. One of their star players belted 2 homers and had 4 RBIs. And we got to see a reigning Cy Young award winner start in a World Series game against the New York Yankees. What more can you want.

Here are a few picks from a very fun evening (click to enlarge): 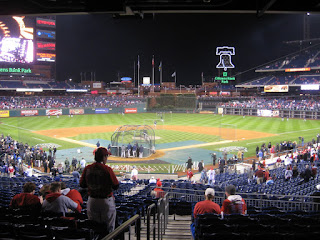 Yankees BP - you can see some of the hordes of media down by the visiting dugout on the left. 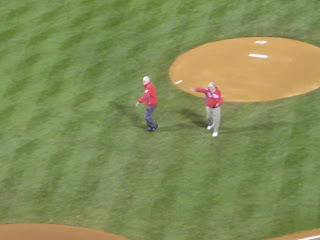 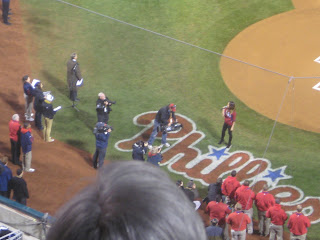 Alanis Morissette - This is the pick of the Celebrity Anthem singers in the Series for my tastes.

I didn't get many good game shots. Just a couple pitcher v batter ones. 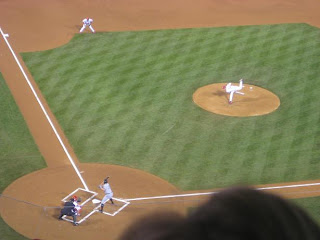 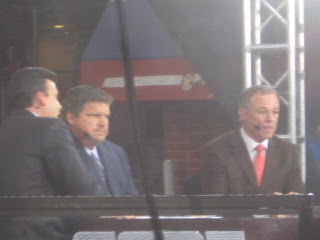 The ESPN Crew including Krukker and Bobby Valentine

This Trophy is still property of the Philadelphia Phillies!!
for at least the next couple of days and hopefully longer 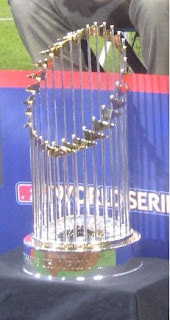 One final comment hey Major League Baseball - Get your stuff together, what the hell is the World Series Trophy doing sitting on an 6 inch high Amazon box covered by a piece of cloth. Yes it is sitting there like a foot off the ground - those khakis behind the trophy belong to a SEATED Al Leiter. Ridiculous - throw down a few bucks and build a stinkin Pedastal for the thing.

For all you Spot the Sig! fans, I am running behind this week, I may just fold the Profile into next weeks Auto. Congrats to Autograph Cards on picking Carl Crawford.

It's been an entertaining Series so far, so I'm glad you got to be there for part of it.

I'm very curious to see how tomorrow's game goes. Pedro vs. Andy Pettitte would have been a marquee pitching matchup 10 years ago. Now? It could be great, it could be a disaster.

Very cool that you got to go. I would love to take in a post-season game sometime but doubt I ever will.