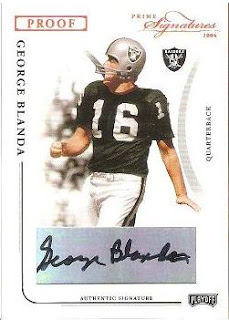 NFL Hall of Famer George Blanda played an amazing 26 seasons spanning 4 decades. His career started in 1949 with the Chicago Bears. Blanda actually retired following the 1958 season due to a disagreement with Coach George Halas over Blanda being moved to Kicker only duty.

Blanda would re-emerge in 1960 as the Quarterback for the Houston Oliers of the brand new American Football League. Blanda led the Oilers to the first two AFL titles and he was also a member of the 1967 Oakland Raiders who lost to the Green Bay Packers in Super Bowl II.

Blanda played football as a Kicker until 1975 when he retired at the age of 48. Today he is the third leading scorer in AFL-NFL history. His 2002 career points do not even include 236 TDs he threw as a quarterback. Blanda is still the league leader in Career Extra Points and attempts (943/959)

George Blanda is part of the great lineage of quarterbacks to come out of Western Pennsylvania.

For The Collector:
I picked up the above 04 Blanda Auto for $7.86 via auction a few months ago. A Hall of Famer that played in the AFL and was born in the 1920s - I like that deal. The lowest Blanda Auto in recent eBay sale was an 08 Press Pass Legends card that went for $16.25.

The Donruss 04 Playoff Prime Autos are stickers, but they are imbedded in the card which sharpens up their look a bit. Some of the other big name vets in the Auto set are Jim Brown, Jack Lambert, Ozzie Newsome and Paul Warfield. 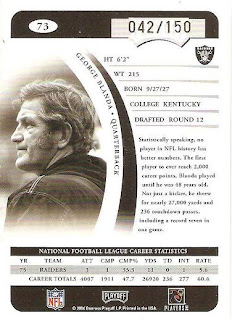 This is one of my complaints with many retro cards of stars from the past - Why do the card companies often put the stats for the players final year on the card? I mean if you are going to only put one years stats on the card, how about 1961 when Blanda was an All-Pro and led the league in TDs and Yardage?

This card would have likely been a double had it been a baseball player or a more recent football player. I bumped it up to a triple because Blanda was outside of the box for the typical STS! auto. This didn't fool Laurens of Card Buzz who spotted the sig for the second consecutive week and once again did it in under 5 minutes!!! The Triple puts Card Buzz on the scoreboard and very much in the running as we head into the final three innings.

I will have to dig out some more toughies to keep everyone interested.

The scores for this years turkey day games were:

STS players nailed each of the first two games as Night Owl hit the Green Bay Score and Nachos Grande picked the Dallas game. Cardboard Junkie narrowly beat out Nachos for the Denver score as he was 5 below the Broncos 26, while Nachos Grande was 6 above.

Each player will get a single for the bonus which will plate a runner for Nachos Grande and get Cardboard Junkie on base for the first time in the game.


You are welcome to join the game at anytime. If you need more Spot the Sig! details click here.