We are in the 7th inning of the Spot the Sig Contest and there is a very tight race with only three autos remaining. There is a Five way tie for first place, with several players all at 1 run. Card Buzz and Paul's Random Stuff have both managed to pick up two autos While Play at the Plate and Autograph Cards each have one. These four Sig Spotters are all on the leader board along with Nachos Grande. While he has not ID'd an auto Nachos Grande has diligently persevered with the Bonus questions and managed to manufacture a run and is in very good standing with the bases loaded.

The above auto is worth a Triple.

This weeks bonus question is a new feature for Spot the Sig! This is the Phungo Book Club Bonus - Here are some of the selections from the Phungo Library (Click to Enlarge): 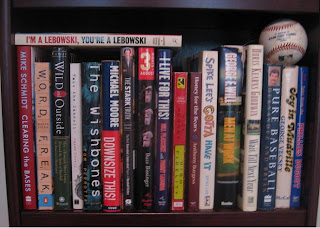 One of my favorite musicians, Warren Zevon, once said "We buy books because we believe we're buying the time to read them." I am not sure he was the original. A similar statement is also credited to German philosoher Arthur Schopenhauer.

Regardless this seems to be the case in the Phungo household - we have significantly more books then we could possibly find the time to read. This is why in the photo above one finds 18 books, however, I have only read ten of them. For the bonus your task is to pick out one of these books which I have read.

There is a ground rule for this weeks bonus. Each book can only be picked once. If you guess a book that has been previously picked by another contestant, your pick will be considered invalid. The Book Club Bonus will be worth a Single, all runners advance one base.


Spot the Sig! standings going into the 7th.

You are welcome to join the game at anytime. If you need more Spot the Sig! details click here.

jim bouton and clearing the bases

Damn. It would help if I actually remembered that there would be one of these each Sunday night.

Tales from the Phillies Dugout.

It would help if I remembered to check these a little earlier in the evening, I guess.

Word Freak for the Bonus! I'll just keep pecking away one bonus at a time...haha

I just set an alarm so I don't forget about this next week.

Bouton is correct Bonus is open till Noon on Tuesday.

I have read two of the books. Word Freak and Men at Work, but both must have been before I started Readerman.net

Paul's Random Stuff and Nachos Grande both get the bonus. Full STS wrap up today or tomorrow.