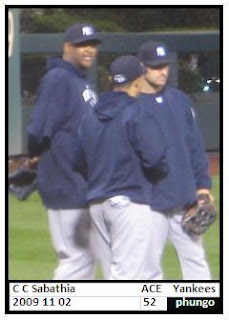 Tonight the Phillies return to Yankee Stadium for the first time since the game 6 to the 2009 World Series. CC Sabathia will be pitching against the Phils tonight - The Phils and Yanks split the two Series games the Captain started.

The Phils will counter with their new Ace who was not part of the 2009 squad, Roy Halladay. It is a fun mid-season match-up between two star pitchers and I am sure that more than just Phils and Yankees fans will be looking forward to the game.

The Photo from the above Phungo card was taken during BP prior to game 5 of the 09 series. The Phils won game 5 v AJ Burnett - Chase Utley hit a pair of Home Runs, tying Reggie Jackson's Series HR record of 6.

CC Sabathia was also featured on a 2009 Phungo card. This picture was also taken during playoff game. Probably not one of Sabathia's finer moments, game 2 of the 2008 divisional series. CC gave up a memorable 2nd inning grand slam to Shane Victorino and couldn't make it out of the 4th inning. 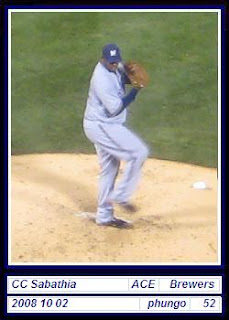 Sabathia may be the only non-Phil to make both Phungo Sets, and almost definitely the only player to be featured on 2 different teams.

The Phils Starter for tonight's game, Roy Halladay has yet to be featured on a Phungo card - But I would think he has a good chance of being in the 2011 set. Will this be the Photo? 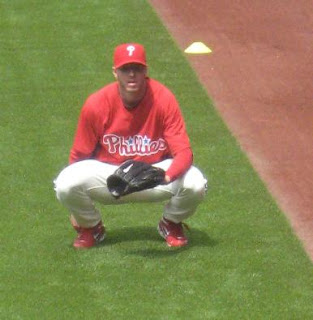