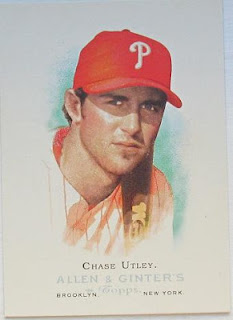 A few weeks ago Topps Released the 7th edition of the Allen & Ginter product.  This coupled with the upcoming retirement of Chipper Jones and the recent move of Ichiro Suzuki got me thinking about the players that have been featured in Allen & Ginter.


The set is good size but at 350 cards it is not nearly as big as Flagship or Heritage.  Therefore most stars get included, but not all of them.  350 cards would average out to less than 12 players per team.  In addition slots are lost to non-baseball celebs, subjects, and retired players so the number of cards per team averages closer to 10.


Ichiro and Chipper are among the players that have appeared in all seven Allen & Ginter releases.  And up unitl this point they have always appeared for the same team.  If Ichiro sticks around to play in 2013, he very possibly could appear in that set as a Yankee or with another organization.


I did a little resarch and found that there were 48 players that appared in every set from 2006-2012.  Of those 26 made all 7 appearances representing a single team.  The Cover Card for this post features Chase Utley who is among those 26 players to make 7 A&G appearances all for one club. 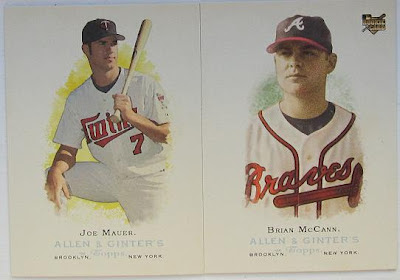 
A couple of catchers.  Both of which should stick in A&G for a while. 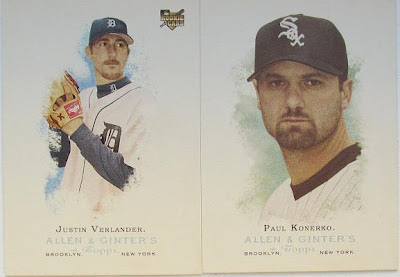 
AL Central featured here.  Konerko had a couple of seasons outside Chicago, but they were all pre-A&G.  A-Rod and Josh Beckett both fell into the same category - multiple clubs, but were with teams other than their current one prior to the initial A&G release.


Several players missed the 7 by one year.  For whatever Reason Derek Jeter and David Ortiz were not included in 2010 A&G.  I don't recall all of the 6 timers, but Jim Thome was one of them.  I think Huston Street was also in there.

I made a sporcle quiz for the first 6 years recently. I have the new spreadsheet just like youve shown, I just need to update the quiz.

Was surprised to see Grady Sizemore for some reason

Spankee, I hope my math agrees with yours. Let me know if I missed or added anyone.

Nathan - The list makes for an odd collection of players. If your a star for a tm that doesn't have a lot of them your going to get sent out every year (Sizemore, Markakis, Fielder pre-trade etc)