Last week the Hall of Fame didn't get any bigger. One good thing about this is that I don't have to bother moving cards over to my HoF collection.

I am not sure that I have any collecting goals for 2012, but I am considering adding one Hall of Famer to my collection each month.  I am looking to add cards from for each player from the years when they were active.  I think I am covered for anybody that had a career that reached into the 1960s.

At the Valley Forge Show last month I crossed the Hall Member of my list. 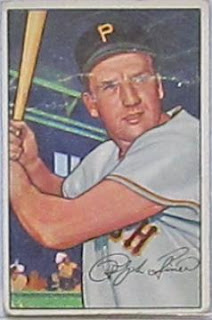 As you can see, I don't get to concerned about condition. The crease would be a lot less noticeable if it wasn't across Mr Kiner's eye. The card is damaged, but looks a little better then this scan shows. Typically I will but up with some creasing but won't take on cards with writing on the front.  Not as picky about the reverse.

Ralph Kiner  didn't get into the Hall on his first ballot or the 2nd or the 3rd. In fact Kiner appeared on the ballot in 1960 but was not voted in until 1975. His career numbers while good, but questionable at best - 369 career Home Runs, 1451 hits - Best MVP finish was 4th in 1949 (Jackie Robinson). He was a six time all-star who never played in the World Series. Kiner's did lead the NL in Home Runs during the first seven years of his career - very impressive - I can't imagine that it has ever been duplicated.

In early December this card went for $5.50 at the PhillyShow in Valley Forge. This appears to be about as cheap as your likely to find the card. $7.95 is the lo-bay finish currently. 5 auctions finished under $10. The Highest closing auction was $85 for a card listed as PSA NM 7.
Posted by deal at 9:54 PM

Email ThisBlogThis!Share to TwitterShare to FacebookShare to Pinterest
Labels: 1952 Bowman, For The Collector, FTC, Hall of Fame, Pirates, Ralph Kiner