I know very little about the Kardashians - I don't really watch Talk Soup as much as I should, but somewhere along the line I found out Bruce Jenner is connected to the show. 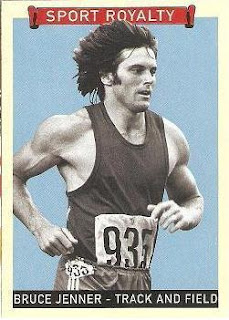 For the Collector - This is an insert from 08 Goudey - I think this came out of a blaster.  2008 was the 2nd year for UD Goudey which I believe ran for 3 releases.  Similar cards have been listed on ebay recently for under $2 and have not sold.   It appears that UD Razor and some other manufactures have produced Jenner Auto in their recent sets.  There are a handful of low-end sticker autos that have soled for under $10.  $10.  Recently $200 bought a pair of 2008 Allen & Ginter autos one of which was hand numbered to 10.