Team Phungo headed down to the city of Brotherly Love to take part in the Winter 2013 edition of Restaurant Week. We were very happy to have picked up a reservation at Zahav which features Modern Israeli cuisine - which features Laffa Bread and Hummus. 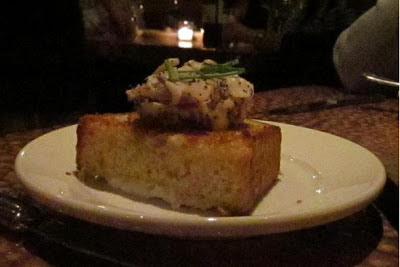 Among the many highlights from the evenings dinner was the Smoked Sable dish above. The challah bread has a poached egg in the center. A interesting dish that even got the thumbs up from Mrs Phungo who is a little picky about her vittles that come from the sea. 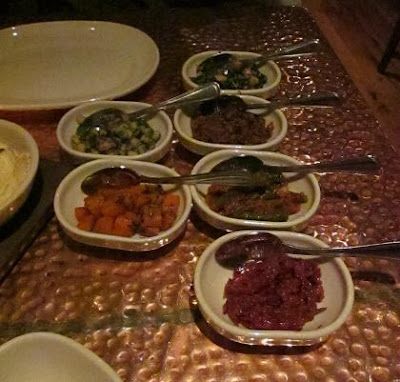 One of the really nice things that Zahav offers is the Salad assortment, which comes out immediately following your drink orders along with hummus and the Laffa Bread which is sort of a large fresh and steaming  hot pita.

It is a great idea for a busy time like restaurant week. If the dining room gets backed up for whatever reason this assures you get presented food as soon as your seated. The highlights include the twice grilled eggplant (RH side 2nd from top) the tahini beet salad (Bottom right) and the cucumber salad (top left) the remaining salads are cooked cumin carrots (bottom left), tabula (top R), and Green Beans (#3 on R).  Other then the greens beans which were a bit spicy for the timid Phungo palate we enjoyed the entire salad  set.

The Zahav restaurant week menu is four courses.  The Table course above an appetizer course from which each diner selects a pair of options.  Our four dishes included the Sable at the top, fried cauliflower, Haloumi (fried ricottaota cheese), and beef cheeks pastilla (beef cheeks dough wrapped deep fried and topped by an apricot jam) .  I don't think we realized it at the time, but we definitely went on the comfort food end of the scale - while I like the Haloumi, I am not sure I would pick that off the RW menu if we did it again - it is sort of glorified mozzarella sticks.  Cauliflower will never be a veg I warm up to but Zahav does a great job with them.

For our main dishes we went with Merguez and the Duck Kebab. Both are meatball dishes -
Merguez is a lamb sausage accompanied by a sweet fig sauce 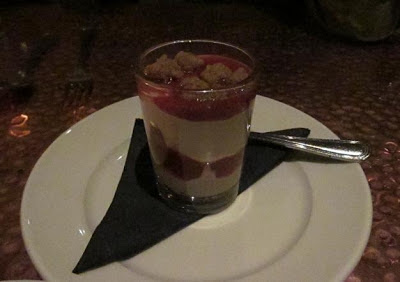 Another nice thing about RW is instead of splitting a dessert we get Two! Halva is a mousse with Chickpea Pralines - thats right Chick Peas - and it works.  They give the dessert a nice crunch  contrast.  The 2nd dessert was Konafi - a sweet ricotta cheese and ice cream dish.

Scorecard
Vittles - Lots of tasty dishes. Zahav also introduced me to some interesting new grub and culinary ideas. Although a few things were bit outside my range. Triple
Service - Double - We were seated quickly and the servers were friendly and knowledgeable about the Zahav dishes. The service did seem a bit rushed, but that may have just of been me wolfing down my meal.
Atmosphere - Double - brisk and busy without being crowded and loud.
Value - Double. The RW menu is 4 courses for $37.80 pp including 8% Philly food tax.  Thats reasonable for a meal at a Zahav caliber venue for a meal including both apps and desserts.  The 4 courses were more then enough food for a hungry Phungo. A bit of a complaint is that the drink menu doesn't include the city Liquor tax so each of your drinks goes for 10% more then the menu listing.
Oddity - I want to talk about the Websites for Solomonov restaurants. Both Zahav and the much simpler styled Federal Donuts have very annoying web pages - why you need animation that runs for 2 minutes before seeing the donut menu mystifies me.

For more Zahav here is a look at the Foobooz recommendations on the menu.
and Craig LaBan's 2012 Review.