I wanted to find a card that combined the BoSox and Cardinals and was very happy to find this beauty. 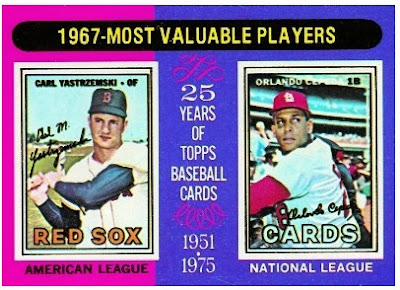 
The 75T MVPs is one of the most fun subsets in the Topps canon. It marks both the 25th anniversary of Topps and the MVPs of each of those seasons.  In 1967 the MVPs were Yaz and Orlando Cepeda pictured here on the minimalist 67T Design.

Recent MVP discussion appear to come down to discussion of various traditional stats vs the single WAR stat.  Tonight I would like to examine the WAR numbers for these two future HoF players during their 67 MVP seasons - which was the only MVP for each.

Yaz
Working from Left to Right we start with Yastrzemski.  He won the AL Triple Crown in 1967 and collected an astounding WAR of 12.41.  The 12.41 WAR is the highest single season number for anyone in the history of the game that is not named Babe Ruth. Yes Yaz won the Triple Crown and he had the 4th highest WAR in history, but he didn't get voted MVP unanimously.  Cesar Tovar received a single #1 vote for his 2.44 WAR season - I have no idea.

Orlando Cepeda
Of course in a year when Carl Yastrzemski puts together one of the greatest seasons in history and doesn't get a unanimous MVP, Orlando Cepeda collected all 20 MVP first place votes in the NL Balloting. Cepeda had a very good year, but not historic. His 6.80 WAR was 5th among vote getters - Ron Santo led the league at 9.77. Cepada led the league in RBI (111) and finished 3rd in OBP (.399)

MLB 1967
Finally it should be noted that in 1967 the Cardinals and Red Sox met in the World Series. Yaz hit 3 Homers and batted .400 in the Series.  Cepeda collected 3 hits total and batted .103.  But baseball is a cruel game Yaz and the Red Sox lost to the Cardinals - Bob Gibson won 3 complete games giving up 3 ER across those starts.

Other Voices
Night Owl Cards - 2010 posting from the NOC 75 Topps retrospective. Contains some interesting observation on 67T and notes that Orlando Cepeda's MVP season was his first with the Cardinals.