We are returning to our 1915 Phillies retrospective after a LONG hiatus. Today we look at a player who didn't even make the original cut for the feature, Relief Pitcher Stan Buamgartner. 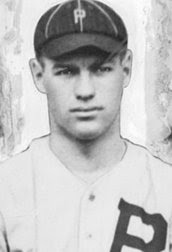 At twenty years old Stan Baumgartner was in his second season with the Phillies in 1915. He got into 16 games including a single start at Ebbets Field on June 2nd.

The 1915 Phillies pitching staff was anchored by two future Hall of Famers in Grover Clevland Alexander and Eppa Rixey thus they had no need for Baumgartner in the postseason. It is unfortunate as it was Baumgartner's only shot at pitching in the World Series. He spent the remainder of his playing career in Philadelphia Five seasons with the Phillies and 3 with the A's.

Originally Baumgartner didn't make the cut for our 1915 Phillies Series. He had a minor role with the club, and I didn't have a baseball card of him - two major strikes against. However, last week I came across an interesting Frank Fitzpatrick article on Philly.com.

Fitzpatrick appears to base much of his article off a forthcoming bio by SABR researcher Phil Williams - one of the interesting aspects of Baumgartner's career is that he went on to become a baseball beat reporter following his playing career. The article goes into greater depth about his journalism career plus Baumgartner's football playing and coaching experiences with University of Chicago and at Nearby Delawarare.