The Phillies are in Miami to play the Marlins and Ichiro is in the lineup for the Home Team. The Future Hall of Famer entered the game with 2996 Hits - FOUR short of 3000

Tonight we have a related card sort of.... 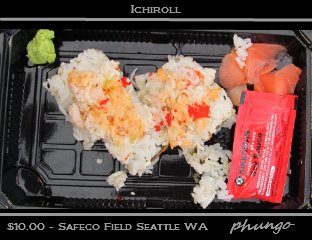 Team Phungo made the Trek out to Seattle in 2012. Safeco is known for it's many food and drink options - one of which is the Ichiroll, an item on their Sushi Menu. I don't really recall what was in the roll, but I think it was pretty tasty.

Ichiro was traded to the Yankees later in 2012 and I am not sure if the Mariners still sell the Ichiroll, but it would be a nice gesture to continue the honor.

When I first conceived of Phungo Cards I wanted to have some fun ones in each set, this one certainly qualifies.