On October 13th Music Icon Paul Simon will be celebrating his 75th birthday.  I don't believe there are any Paul Simon cards in the Phungo collection, however I think we have found a worthy substitution.

I also don't have any Joe DiMaggio  cards from his active years (likely out of Phungo budget ranges), but I do have a  handful of retro cards of the Yankees legend.

As I am sure most folks are aware DiMaggio is named dropped in Simon's song "Mrs Robinson" from "the Graduate".

Paul Simon is still a baseball fan, earlier this summer he was shown on TV at an Orioles game after being spotted the previous day in Pittsburgh watching the Pirates. Pretty cool trip for any fan. 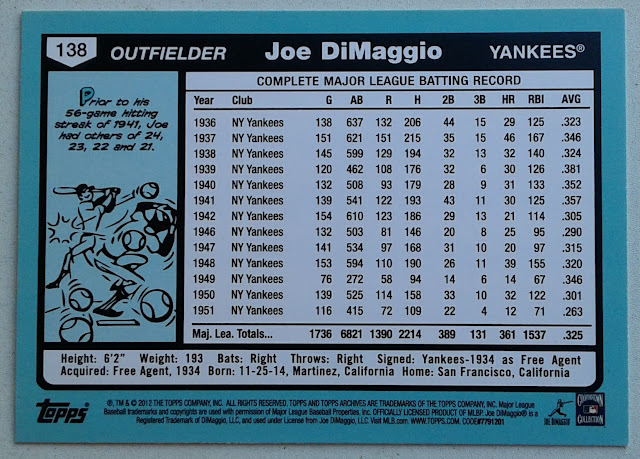 The day Paul Simon was born Joe DiMaggio was enjoying one of the first few days off following his celebrated 1941 season. That was the year DiMaggio authored his 56 game hit streak while on the way to his 2nd of 3 MVP awards. The streak was so Compelling that DiMaggio won the MVP award over Ted Williams who hit .406 in 1941, a mark that has been unmatched since.

The Hitting streak is noted in the cartoon on the back of the archives card. A solid choice with some rather fun artwork. 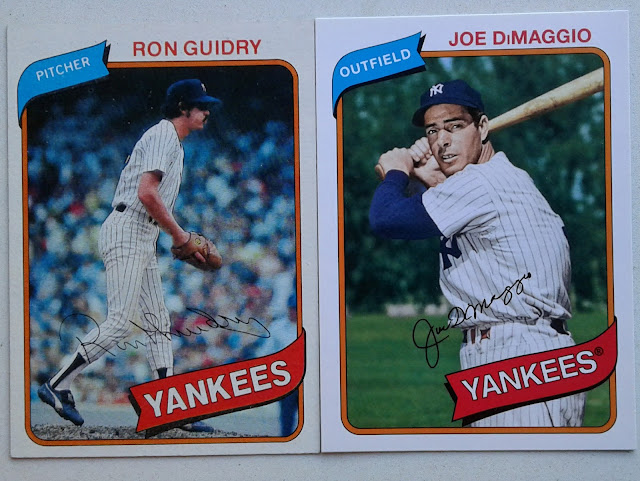 The Archives card draws from Topps 1980 issue. For Yankees cards the homage is satisfactory, the design and colors definitely evoke the original. If one were to quibble I supposes there could be complaints about the font sizes of the text on the two pennants, but I think it is close enough for Archives.

Paul Simon was constantly on rotation in my house growing up - my parents loved singer-songwriters (Simon, James Taylor, Billy Joel, Jackson Browne, etc.), so that love was naturally passed down to me. His voice still gives me goosebumps whenever I hear songs like "The Boxer" or "Sound of Silence" and his solo work ain't half bad either (massive understatement).