October 8th marks the 60th Anniversary of Don Larsen's perfect game, which he threw in Game 5 of the 1956 World Series. 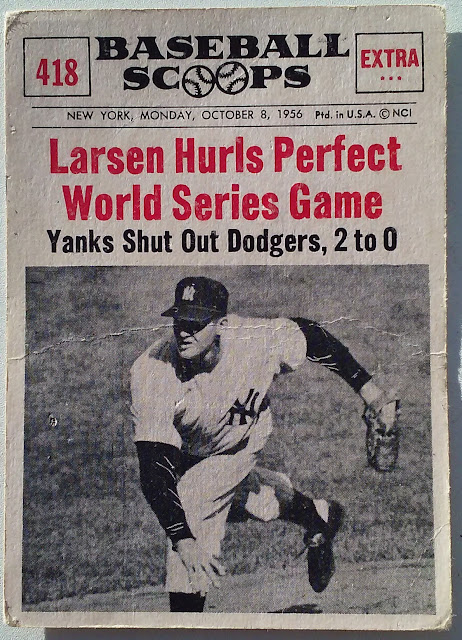 Larsen and the Yankees defeated the crosstown rival Brooklyn Dodgers 2-0 that day. Offensive Heroes including Mickey Mantle who clubbed a fourth inning Home Run and Hank Bauer who plated the games other run with a single in the sixth.

The event was honored by this beautiful 1961 Basesball Scoops Card. Nice touches include a decent photo for the era and a date line specific to the game. I am also a fan of the title logo which contains the bouncing baseball iconography rather in place of the OOs in scOOps.

The pivotal game five victory gave the Yankees a 3 games to 2 advantage over the Dodgers in a Series that would eventually go the distance. The Yanks won game 7 and Larsen took home MVP honors. 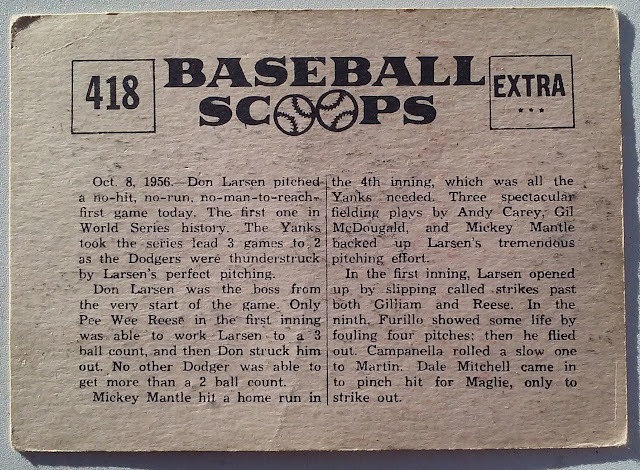 Great back of the card for a game that certainly warrants the attention.  Four Paragraphs of text! Some of it is a little awkward - the 2nd Paragraph has two sentences that essentially state the same fact about 3 ball counts. Pee Wee Reese's first inning AB is mentioned both here and in the final paragraph. Regardless I still love the card.

Topps honored Larsen with a similar card in their 1961 set which can be found here.