Matt Stairs celebrates his 50th Birthday on February 27th. Of course Matt will always be remembered for one of the biggest Home Runs in Phillies history. 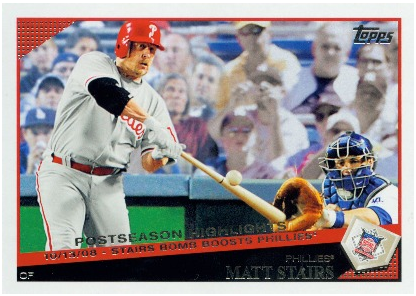 In the 8th inning of a 5-5 tie Stairs came in to pinch-hit and blasted a 3-1 pitch from Dodgers pitcher Jonathan Broxton deep into the Dodger Stadium bleachers. It is one of the hardest hit balls I have ever seen. The homer capped the scoring as the Phillies won the game 7-5 and took a 3-1 series lead. 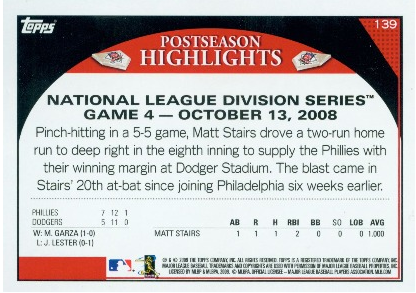 The back of the card has a similar synopsis as we have written above along with the RHE box. Fumy how it is unlabeled bit all baseball fans know what it means. Stairs line for the game consists of his single PH AB - 2 RBI nobody Left on Base! 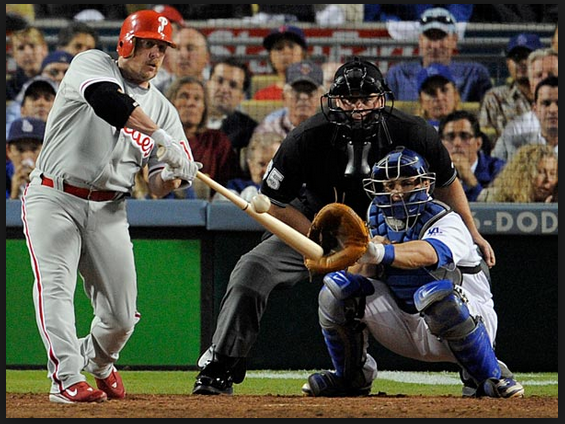 I was able to find the original image but it there is no associated photo credit in the accompanying Philly.com article. Notice that on this 2009 card the umpire has been digitally removed. Of course this meant that something had to be added in the umps absence. It looks like Topps took a crowd from a different game and inserted them in the space vacated by the ump. Check Stairs head then move to the right. The first guy is a match, Kid in orange shirt missing, Blue shirt w/ blue cap and shades over cap also missing. Same thing on row below - matches end with the person in the maroon shirt. ahh The joys of Photoshop.

UPDATE: I have found the source photo, it was taken by Chris Carlson and can be found here.

This no-umpires thing weirds me out so badly.