Earlier this week we got the sad news that baseball card icon Oscar Gamble died. I was a little surprised to find out that I had never posted anything on Gamble or his cards. Today we rectify that situation.

Oscar Gamble falls into that category of players that played when I was a kid and I knew about but I never knew spent time with the Phillies. There are a couple of these guys out there, Fergie Jenkins is pretty notable as are Larry Hisle and Ken Brett.

When I returned to collecting as an adult I was pleasantly to see Oscar Gamble show up in the early 1970s issues bearing Phillies pinstripes. 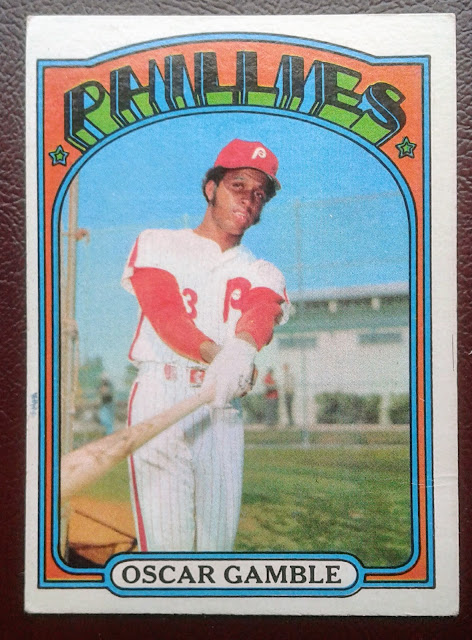 All of the bright colors of 1972 Topps with "PHILLIES" jumping off the top of the card fit Oscar Gamble perfectly. I also like the photo that appears to have been taken at the Phillies Spring Training facility in Clearwater Florida. As I look at Gamble posing for the shot with the follow through on a swing I wonder if the lean figure in the background with the beige jacket is Paul Owens.

This is one of three cards Topps issued of Gamble with the Phillies. He has a shared Rookie Card in 1970 and has a great action shot in 1971.  Nice cards all, but I chose his last Phillies card not for the front but for a fun fact I knew at one time but have likely forgotten multiple times. 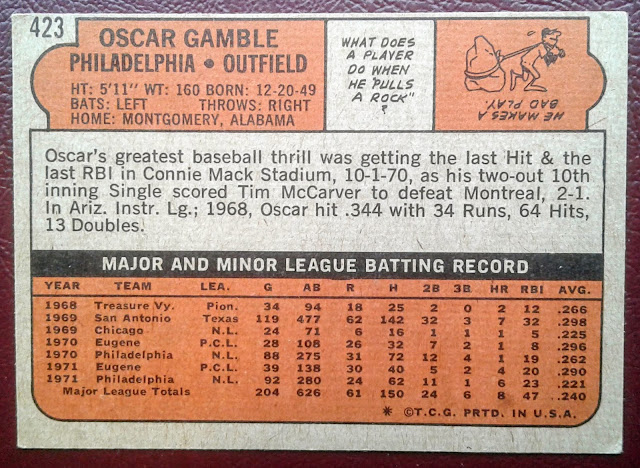 First off I am not referring to the vocabulary lesson in the cartoon - a good one I suppose, a phrase I never use, but it really doesn't need much explanation.

The Phun Phact I like on this card discusses the last game a Connie Mack Stadium. On October 1st 1970 the Phillies defeated the Expos 2-1 in extra innings. And as described in the excerpt on the above Oscar Gamble singled off Howie Reed plating Tim McCarver. It was the last hit and RBI ever recorded at the venerable building

The Inning in Baseball-Ref appears as follows 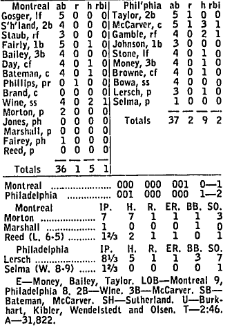 In addition to Gamble looks like Tim McCarver had a nice day while scoring the stadiums final run. Larry Bowa is the only player in the box that would eventually play during the Phillies late 70s glory years. The big name for Les Expos is Rusty Staub, however twitter star @JohnnyBateman7 is also present.

I don't think I knew that Fergie Jenkins started out on the Phils; I associate him so much with the Cubs and Rangers. I might need to pick up his 1966 card, now.