GRAND SLAM for Plaschke, Thy Sweater is Argyle as he identified Andre Ethier as this weeks auto.  Congrats to team Plashke, a newcomer to Spot the Sig! this season who picked the right time to pick up their first Auto.  This is also the first time that a Grand Slam has been hit in STS! history. 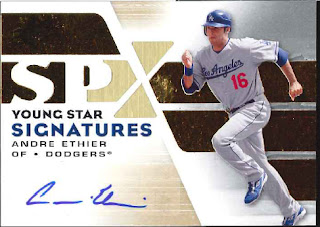 Sorry to AdamE this is not from 2008 Bowman's Best, which he had guessed in the comments.  There wouldn't have been a consolation prize for that but it was a worthy try regardless. 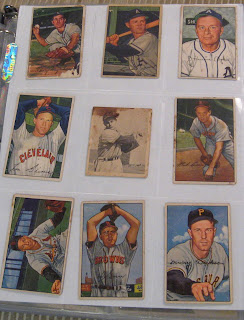 I picked up a bunch of vintage Bowmans from two different Dollar Bins.  The oldest of these was a tattered 1948 card of Jack Lohrke which is located in the center of the above photo.  Congrats to Rhubarb Runner who went back the furthest of any STS! players and correctly came up with 1948.

Does anyone think this tidbit would show up on the back of a card today? 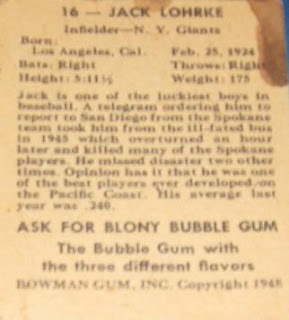 According to the Jack Lohrke wiki page the other brush with death that he survived was while serving in the Army during World War II.  Lohrke was bumped from a ill-fated military transport plane that would later crash.

Lohrke (nicknamed 'Lucky') played in parts of 7 major league seasons including a handful of games with the Phillies.  He appeared in the 1951 World Series in which the New York Giants lost to the Yankees.


Too Many Grandersons - Tigers: 1 Run in and Bases Loaded

Thoughts n Sox - Bosox: On Deck
You are welcome to join the game at anytime. If you need more Spot the Sig! details click here.

I consider myself Lohrke to have gotten the year right!