A nice surprise package from Night Owl Cards arrived at Team Phungo Headquarters a few weeks back.  NOC has traded with folks from across the nation and occasionally tracks the locations.  I figure I have recieved 5 or 6 trade packages from the Night Owl.  It amazes me that He finds time to blog. 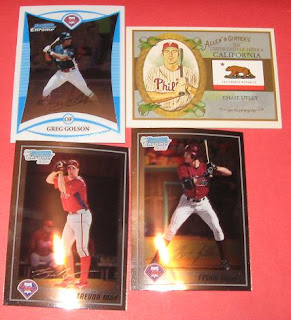 There were several Highlights in the package - Today I am focusing on the Prospects and the Phillies hobbled second baseman Chase Utley.

The Greg Golson card is from the 2008 Bowman Draft Set.  Each year in this set there is a subset dedicated to the players featured in the years Futures Game.  The 2008 game was played at the Old Yankee Stadium and Team Phungo was there.  This card will go into the Phungo Games Attended binder - which is one of my favorites.

The bottom row are cards from the 2010 Bowman Set and include Trevor May and Tyson Gillies.  May is a 21 year old RHP had a pretty good year at Lo-A Lakewood in 2010 after a Rough start at Hi-A Clearwater.  Tyson Gillies came over in the outgoing Cliff Lee deal - he lost most of 2010 due to an injury - his development was hampered further when Gillies was involved in a drug related incident with the Florida Authorities.  Gillies was eventually acquitted of the offense, hopefully 2011 is a more productive season for the young man.

As you likely know by now Chase Utley has not set foot on the field during spring training and there are whispers that Chase may be out for a large part of the 2011 season.  This year is one that has a lot of promise for the Phils, I hope that Utley gets to take part.
Posted by deal at 6:15 PM

It amazes myself that I find time to blog. I should be asleep right now.