Plashke strikes again! James Loney Double plus the bonus to put runner on first and 2nd with 4 runs already across. 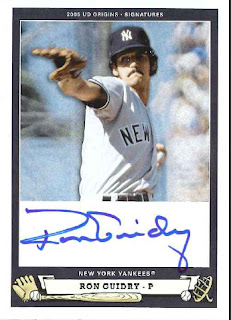 2005 UD Origins #RG1 Ron Gudry
Louisiana Lightning - In 1978 Guidry went 25-3 and posted a 1.74 ERA.  When I was a kid this was unfathomable and remains so to me today - even after watching Roy Halladay go out there every fourth day for the Phils.  Guidry's 1978 performance earned him a Cy Young award - he finished 2nd in the MVP voting to Jim Rice.  Guidry's spent all 14 years of his career in pinstripes.  During his tenure the Yankees captured two world Titles in 1977 and 78 returning to the playoffs in 1980 and 81.
I believe Ron Guidry also holds the distinction of being the first player to make his first career Major League At Bat while appearing in a World Series Game - I checked around the -Net but couldn't confirm this.  It's one of those weird chunks of trivia that thinks it is in my faltering brain, but isn't sure.
Guidry appeared on Eight Hall of Fame ballots before being dropped in 2002 (receiving 4.9% of the 5% necessary to remain under consideration)
For the Collector
UD Origins are good looking on card autos.  This one went for #4.49 via eBay last year.  Current auctions have the card priced at $8.40, which is the low among completed auctions for Guidry's Auto cards.
The Yankees Signature Series Guidry Auto just sold for $9.50.
The Topps Ron Guidry Rookie Card is a quad RC, #599 within the 1976 Topps Set.  The Rookie Pitchers card also features Pat Zachary who started a number of years for the Reds and Mets.  This card has sold for a range of $2.05 to $8.50 via auction, but I suspect that it can be had much cheaper.  Guidry's first solo card is #656 in the 1977 Set and is basically a common.
Bonus
Five out of 12 contestants picked up bonuses.  Oddly early answers worked against most folks as the early guesses tended to be incorrect including 2 misses by the Rhubarb Runner.  In addition to Plashke (Green Day who I saw in a small club in Allentown roughly 20 years ago), Night Owl, Captain Canuck (Waxaholic), Jim (Phillies Room), and Nathan all picked up the bonus.
I have had a few music related postings here, and most of the shows I see are on the more intimate side and local so if you chose those acts you were more likely to get the bonus.  3 bonuses were left avalialbe Evan Dando (which may have been hard to read in the photo), Pat DiNizio (of the Smithereens), and Chuck Prophet.
STS! Standings at the 7th inning Stretch.

Plaschzke thy Sweater is Argyle - Brooklyn Dodgers: 4 Runs, Men on First and 2nd.

Email ThisBlogThis!Share to TwitterShare to FacebookShare to Pinterest
Labels: For The Collector, FTC, Ron Guidry, Spot The Sig, STS, Yankees