It is becoming a 2 team race as Card Buzz and  Plaschke Buzz have picked up the Autos in the last four innings of Spot the Sig!  Congrats to Card Buzz for connecting on a 2 run homer by correctly identifying this weeks Harold Baines Auto. 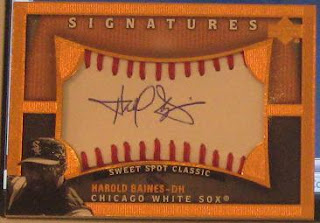 2005 UD Sweet Spot Classic  #HB Harold Baines
Harold Baines got his official Hall of Very Good Pass this year as he failed to get the thumbs up from at least 5% of the BBWAA balloters.  A lot of folks have different issues w/ the HOF voting process for various reasons.  I really do not have many problems with it,  The automatics are automatics,  The borderlines are borderline for a reason.  Sure there are some dumb voters, questionable criteria and some daunting questions regarding PEDs and other issues - but for me it works well enough.
I would like to see them add a "Deferment" vote, which the electorate could use to keep the player on the ballot but not give him a Yes vote.  Had this been in place I think many voters would have at least kept Baines on the ballot for the length of his eligibilty.  This option would also help voters separate first ballot HOF players from the next tier.
Baines Near Hall of Fame Career spanned 22 seasons with for the Chisox Orioles Oakland Texas and Cleveland .  He racked up 2866 Hits and 384 dingers.  Much of this was accomplished as a DH and may have swayed the voters against Mr Baines.  It should be noted that he did play over 1000 games in the outfield.  Baines represented four different teams in Post Season play and reached the World Series with the Athletics who in 1990 lost to the Cincinnati Reds.  His playoff numbers include 5 homers and a .324 BA.
Harold Baines has more hits than any eligible player not in the Hall, Similarly with the exception of Rusty Staub and Rafael Palmiero every eligible player that has played more games than Harold Baines is enshrined in Cooperstown.
Bonus
Plaschke while unable to get the auto in the typical 10 seconds he usually does, was smart enough to quickly register his bonus guess as the New York Yankees.  For those of you familiar with Branding you likely know the Yankees have one of the most recognizable logos in sports and commerce.
This was also the only correct response for the bonus.  Amazingly there were no Hockey Teams that made the cut.  The Baseball Teams included the Dodgers and Braves.  NFL teams were both the Broncos and Dolphins - I believe a Broncos fan may have lived in my neighborhood as I spotted their colors a couple of times.  The College Logos belonged to the U of Michigan and Oregon.  the NASCAR was Eliot Sadler.  Other interesting sports related Apparel I saw were NBA and NHL League Logos and Solchi 2014.
The Yankees sightings paced the other teams by tri-fold.
STS! Standings after 8 inning.