This is the 2nd installment of Phun cards, essentially our variation on Cardboard Appreciation.

For a long time I ran a feature titled Hall of Fame Thursday, which featured HoF players and people from various sports at various levels.  It was basically baseball centered with a strong Philadelphia accent.  Sometimes the subjects were big names like Steve Carlton other times they were less well known athletes such as Philly Sports HoF member, sprinter Leroy Burrell.

Today we are leaving the Philly area and taking a look at a Phavorite card in the Phungo Collection of Stan Musial. 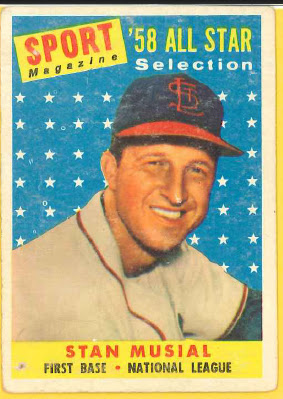 1958 is the first year that Topps had a subset of All Star cards in the collection.  Which is only one of several reasons this card is special.
1) Stan Musial was a first ballot Hall of Famer - 1969
2) You got to like anybody whose nickname was Stan the Man
3) This is not nearly Stan Musial rookie cards, but it is his first card issued by Topps (Musial was not issued a base card in 1958)
4) In my opinion the 58 All Star set is pretty sweet looking.

I challenge you to find a more affordable initail Topps Card of any First Ballot Hall of Famer from the vintage era.  Generally collectors don't value the All Star Subset cards of players as much as the base cards from the same year which controls costs, additionally the Musial Card (along with several other 58 All Star cards) was double printed.

I am not sure what the above Musial card went for, I suspect around $5 - there is a minor pinhole bottom left, but that isn't enough to bother Team Phungo.

Which publication do you suppose offered the cheaper license to Topps, Sport Magazine or The Sporting News? ;)