Phungo 5 with the Phillies Room

We are very happy to debut the 2012 edition of Phungo 5 tonight by talking with fellow Phillies fan and collector the Phillies Room.

P5 is loosely based around the Phillies scheduled opponents throughout the season, therefore there are a few teams that get skipped, typically AL teams that the Phils miss in interleague play.  Another casualty is the several Phillies Bloggers out there.  This year I have decided to expand our format and try and squeeze some extra teams in at noteworthy points in the season.

Spring Training is always a good time for every baseball fan, especially those of us in the North East which really wasn't to wintery this year - and it is also a good time to start Phungo 5.


1)What Phillies player from the past would you like to see featured on more current cards (inserts/Legends subsets etc)?
Bob Dernier as he's always been my favorite player.  Bobby D. made a few appearances in Topps sets in 2005 (Fan Favorites and Retired Signature) but he's been absent from any sets since.  Honorable mentions - Kent Tekulve, Del Ennis, Juan Samuel, Johnny Wockenfuss. 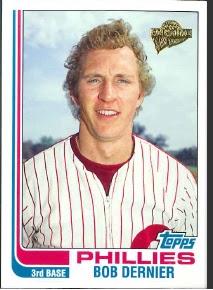 2) What Vintage Phils Team set are you working hardest to complete now?
I need one more card (#255 Milo Candini) to complete my 1951 Bowman Phillies team set.  It's a high number, and it's an expensive card, so it might take a while.  I'd also love to complete a full run of Kellogg's and Hostess Phillies cards from the 1970s.  Back in the day, these cards seemed so strange and exotic to me, so it's been fun tracking these cards down.  A long-term goal of mine is to add more pre-War Phillies cards to my collection.
3) Do you think that Curt Schilling should be this years Phillies Wall of Fame nominee?
No.  I'd vote in Jim Konstanty or Rick Wise before Schilling.  Undeniably, Schilling was a key cog of the 1993 team and he provided the team's sole bright spot during a few lean years for the franchise in the late '90s.  But quite frankly the guy just rubs me the wrong way.  He's got to be on the ballot since he was the best Phillies pitcher of that era, but I wouldn't vote him in this year.


5) Pat's or Geno's
I'm going with Option C.  It's no longer there, but Phil's in Sea Isle City made the best steak sandwich around during the years I visited from the mid '70s through the mid '90s.  The secret was the slightly toasted roll and the secret seasoning in the steak.  Phil sold his restaurant and it's under new management now, but the thought of his steak sandwiches makes me nostalgic for the summers of my youth.  (Phil - If you're reading this, please come back.)
Phungo Note - There is a Phil's in Berwyn PA, and I believe they are associated with the Phils in Sea Isle City.
Score Card
PR handled the Curt Schilling question well, not only conveying my personal feelings regarding Mr Schilling pretty well, but also coming up with some first rate alternative candidates in Konstanty and Wise.  I also like the answer on the Cheesesteak Question.  There are many many quality shops in the area outside of the tourist joints that folks can find a tasty chessesteak and it is good to see them get there props.
4 out of 4 with 1 the Ryan Howard Q still in play.
Thanks to the Phillies Room for helping start out another great year of Phungo 5 and Go Phils!
Posted by deal at 9:07 PM

Is there anyone that Schilling rubbed the right way?