Phungo 5 with The Chronicles of Fuji

In case you haven't been paying attention to the AL West You may not know the Major League Baseball season starts on Wednesday.  The Oakland Athletics and Seattle Mariners will square off in a 2 game series which will be played in Japan.  To help us get ready for the Japan Series today we are speaking with our Oakland A's authority The Chronicles of Fuji.
1) Are you for or against the A's playing in the Japan Series?
I'm totally "for" the A's heading across the Pacific to play some of the Japanese teams & open the season against Ichiro and the Mariners.  I'm a huge fan of international play, because it's great publicity for the sport and an opportunity to see how the MLB players fare against the rest of the world.
2) Steve Carlton is a bit of an oddity for a West Coast Collector - What are your Favorite Carlton cards?
I'm a huge fan of vintage Topps cards, which is why I started my "Lefty Project".  But if I had to pick a few favorites, I'd go with his 1965 Topps rookie card and his 1975 Topps base card.  Oh... almost forgot.  There's one more card of Mr. Carlton that I think is pretty cool.  It's his 1983 Topps Bronze Premium card that was given out to dealers who purchased cases of the 1983 Topps Traded sets. 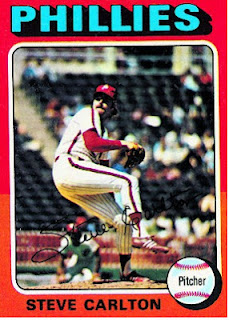 1985 Topps #185 Steve Carlton
3) Staying with the Philadelphia related questions do you fell any connect to Athletics cards related to either of their previous homes?
I only own a handful of vintage cards featuring Kansas City Athletics or Philadelphia Athletics players.  However, one of my collecting goals for 2012 is to add a T206 card to my collection.  And the only prerequisite for this goal is that it has to be one of the Athletics players (hopefully either Chief Bender or Eddie Collins).
4) How many games does Manny Ramirez play for the A's this year?
Hmmm... 35?  He struggled during Spring Training.  But I think the A's brought him in to fill seats, so they'll call him up when he pays his dues.
5) What is something that they missed in "Moneyball"? either the book or the film.
I'm embarrassed to admit this.  But, I've never read the book, nor have I watched the movie.  One of these days, I'll buy the DVD (if I see it on clearance somewhere) or watch it when it becomes available on Netflix.
ScoreCard
Definitely some interesting stuff here.  Out of the Topps Cards that feature Steve Carlton the 1975 is definitely one of the best and and kudos for being a fan of the international game as we are here at Phungo HQ.  I also wish Fuji luck in getting his pre-war vintage colleciton started - going back to the A's Philadelphia roots definitely gets a thumbs up from this corner.
However I must ding Fuji for not doing his homework on Moneyball.  That leaves us with  3 out of 4 for now and We will add a star if Manny gets within a dozen games of 35 either way.
Thanks to Fuji for contributing,
On Deck
We will take a look at the other side of the Japan series when we talk to Emerald City Diamond Gems about the Seattle Mariners.
Looking Back
Philadelphia Phillies - The Phillies Room.
Posted by deal at 8:15 PM

Lol... it's the first time someone other than students have interviewed me. I feel like a movie star... a movie star who still hasn't seen Moneyball ;-)