Today during Andy's High Heat Stats This day in Baseball History feed he noted that today is the 20th Anniversary of Mickey Morandini's Unassisted Triple Play.  Despite the UATP the Phils took the loss 3-2 to the Pirates in extras.

At the time it was only the second UATP in MLB history turned by a 2nd Baseman. - Bill Wambsganss turned the first during the 1920 World Series.  There have been three by second baseman since including one by Phils utility man Eric Bruntlett in 2009. 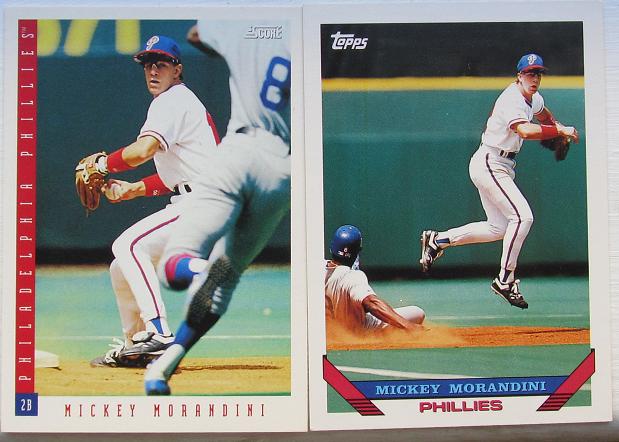 First off the pix on these cards feature a Double Play not the Triple Play mentioned above.

I had always assumed the Topps card featured the Phils ill-fated day game blue caps which were ejected after a few games because 1) the players didn't like them 2) they lost the few games when they wore them.


I assumed wrong.  The years didn't add up.  Turns out the cursed hats were from 1994 - The cards above are from 1993. After some Turn Back the Clock Game research I found that the Phillies wore there 1948 throwbacks for a game on June 21 1992.

If you check the box link above, you can see in the 4th inning Andre Dawson singled followed by Mark Grace hitting into a 6-4-3 DP. I am pretty sure that is what we are seeing here.

nice. i like the 'same play' cards. i'll have to pick up that score card for my double play collection. do you happen to have an extra?

I am not sure if I have a dupe of the Score Morandini card around. I will keep an eye out for it.