I am a little bit amazed that I have really not given a lot of ink to Richie Ashburn on the Phungo Pages.  Although his playing career was long over before I was born, Ashburn was a large part of the Phillies experience for any fan of my generation.  He was the color analyst for Harry Kalas from the time I started watching the game until his death in 1997. 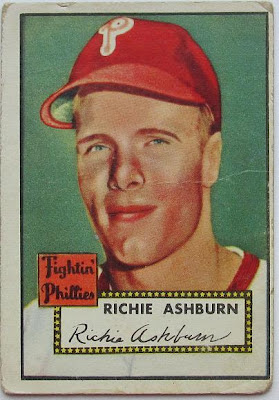 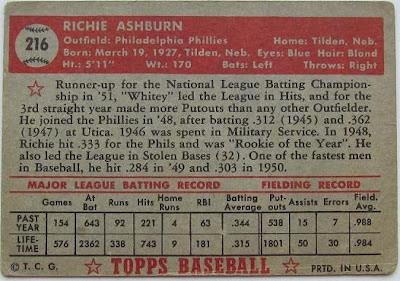 
For the Collector
This is the 2nd Topps card issued of Richie Ashburn.  A recent ebay auction of a rough conditioned 52 Topps Ashburn finished at $9.62.  The Hi auction for a slabbed PSA 9 Mint card was $1710.32.  6 auctions of cards in pretty good condition concluded between $26 and $43.

The above '52 Topps Ashburn was procured for the Phungo collection off an ebay auction for $18.97 in July of 2009.