I am going to see if we can wrap up the 1983 Phillies postings before the end of the year.  Today we look at 1983 NLCS MVP and current Phils TV color analyst Gary "Sarge" Matthews. 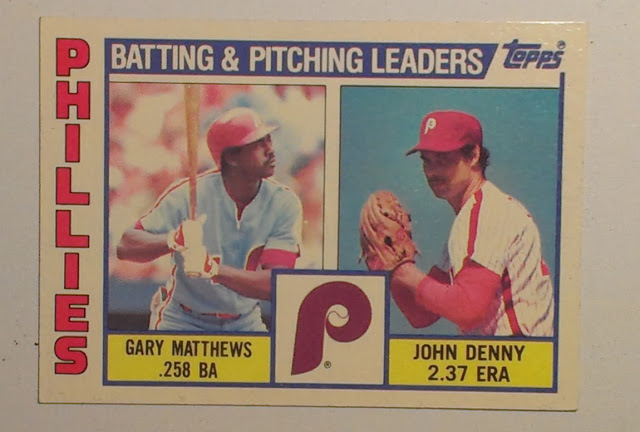 Sarge had a mediocre regular season for the Phillies.  He hit .258 with 10 Home Runs and 50 RBIs.  Those numbers are far below what Matthews expected from himself throughout is career, but as noted on the above card the .258 led the team. Says a lot about what that team had to do to win and the importance of batting average vs on-base pct (Mike Schmidt led the team with a respectable .399 OBP).

The Phillies Room is posting an interesting series with Custom Phillies Team Leader cards that homage the 1973 Topps LL format. In his columns Jim is noting the 5 best and worst leaders for each category over the last 40 years. The Batting Average Custom is here. As you can see in the posting, Gary Matthews .258 in 1983 ranked one slot above the bottom (Jimmy Rollins who led the 2012 offense with a .250!!!)

During the NLCS the veteran left fielder made up for his sup-par year by hitting .429 with 3 Home Runs over 4 games.  The third Home Run gave the Philles a 3-0 first inning lead which they would not relinquish.

Matthews is also homered in Game 3 of the World Series, it was his last dinger as a Phillies player.  Just prior the 1984 seaosn Matthews was traded to the Cubs along with Bob Dernier for Bill Campbell and Mike Diaz.

Numbers and Accolades
Gary Matthews played 16 seasons in the majors. As a Giant, he won the rookie of the year award in 1973.  He made one all-star appearance in 1979. In 1984 he led the league in OPB at .410, his best Offense WAR finish was 4th in the strike shortened 1981 season.