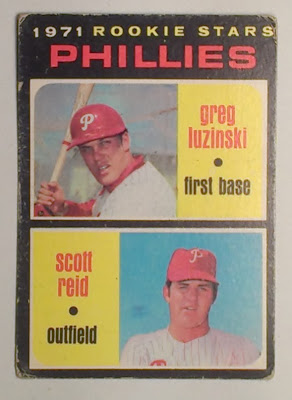 Not only was Luzinski a great slugger for the Phillies in the late 70s and a member of the 1980 World Championship squad - He also remains active in the community and is a team ambassador.

It is great to see him get inducted into the Philadelphia Sports Hall of Fame. This is the 10th induction class for the PSHoF and they still don't have a home, but it is good to know that enough interests remains and that they continue to host annual inductions and dinners.

This years baseball honorees include 1930s Phillies pitcher Bucky Walters and Umpire Shag Crawford. Other notable inductees from across the world of sports include Eddie George, John LeClair, The Eagles Bob Brown, and Andrew Toney.  For more information about this years class check out the PSHoF site here.

For the Collector
The split Greg Luzinski Rookie Card above is regarded a tad above a common. I picked this off condition card out of a pretty decent buck bin at a show in 2009. In recent ebay auctions the card has finished as low as $2.96. On the high end the card finished at $5.91 ungraded - There was a $76 Lot with a graded Luzinski RC, but the anchor of that lot was a 62 Topps Clemente (graded EX).

2008 Philadelphia Sports Hall of Fame Inductees
Mickey Vernon with Links to additional postings
someday I will get around to returning to posting on the other classes.

Congratulations to Luzinski and the rest of those guys. Loved watching Eddie George and John LeClair in the 90's.