This years Hall of Fame Candidates with Phillies connections is even worse than last year.  Curt Schilling returns as does Phoenixville native Mike Piazza who never played with the Phillies but remains noteworthy in the area.  The lack of Phillies on this years ballots may partially explain their hopelessness in the 90s and early aughts. 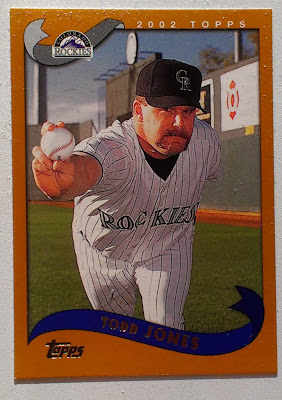 I am not sure if there are any cards out there of Todd Jones in a Phillies Uni.  This weeks theme appears to be 2002 Topps as this is a card of Todd Jones in the Phungo Collection.  Todd Jones is on the ballot mostly because he qualifies on the 10 year requirement and had a few good years.  He is the first to admit he is not a Hall of Famer.

The Todd Jones "I am not a Hall of Famer" is pretty refreshing in a baseball coverage world that will nitpick and name-call repeatedly between now thru July 2014 and beyond over this years ballot results.  To be honest I enjoy the debates - I don't get to invested in the arguments. There are guys I think are HoF and ones I don't - My opinion is certainly no more valid then the next bloggers and not nearly as valid as anybody in the BBWAA.

Todd Jones spent the bottom half of the 2004 season with the Phillies. In '04 Jones was a set up guy and the Phillies had Billy Wagner as the closer. Jones did earn one save for the Phils after Wagner blew a save in Florida.

It was one of 319 Saves Jones had in his career which ranks him 16th all time. He once led the league in Saves with 42 for the 2000 Tigers for whom he spent half of his 16 year career.  The 42 saves were good enough to get Jones his only All-Star nod and his only Cy Young award votes.

Jones was a member of 2 postseason squads including the 2006 Tigers who won the AL Pennant.  Jones earned 4 playoff saves for the '06 Tigers. The last save was the only game Detroit won in that World Series.