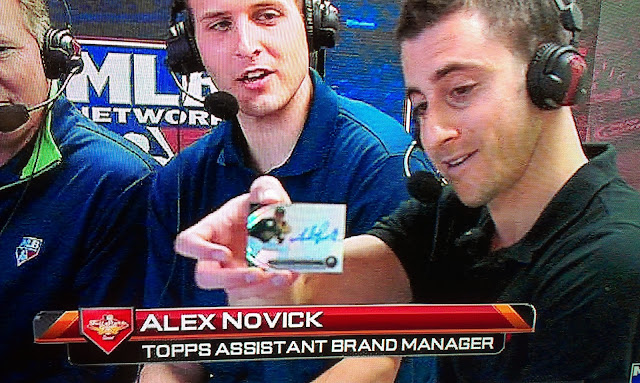 The discussion took place over a half inning which ran about 4 1/2 minutes. Novick stated that the relationship between AFL and Bowman has been extended 3 years. It was unclear if that was inclusive of 2013 or if the extension is 2014-16.

Other observations made by Novick included the following:
- "It's All about the Autographs Now,  Everybody wants the Autographs"
- "Almost all of our boxes have one autograph in them"
- "We have some products that have actually have 5 autographs in them"
- "Bowman has 42 of 54 players selected for Fall Star Game signed to Autograph deals" .
- "Bowman has deals with "About" 40% of the players on AFL rosters"
- "That is what our collectors want, That is where the value is"
- "Bowman is the first time a player will ever see themselves in a Major League Uniform on a baseball card, Typically it's the most collectible card they'll have throughout their career."
- "Our Editors back in New York put a lot time and a lot of effort into picking the best shots possible"

Those quotes aren't quite verbatim, but I think I captured the spirit of Novick's points. I have felt that card collecting has become driven by high end and Topps appears to agree.


Addison Russell
Novick displayed the Addison Russell Bowman Platinum card because he was batting at the beginning of the inning. Russell grounded out 4-3.  When asked about the value of the card Novick stated "$20-$30".

I am not sure if the card is a serialed parallel, but I found that a similar looking Addison Russell Bowman Platinum closed at auction at $7.77 - that is 60% under Novick's $20+ estimate. However, a "Platinum Ice" version of the card serial#d/10 did go for $110.


Joe Magrane
During the segment Joe Magrane (partially shown in the lefthand side of the frame above) added the following player perspective on trading cards:

Beckett and Topps people have zero idea how to value cards. When I was at the Philly show I was pimpin' my Puig red auto around trying to sell or trade it (it was a redemption) and the Beckett guy said it was worth 1,500.. No one on earth would give me that kind of cash for that. All the dealers were saying 4-600 which was in line with previous sales.

Whats the value of alex novick mini auto. #ee-nn topps card. 5 out of 10.mr.novick is holding a bass fish.