Tonight we return to our 1964 Phillies feature with the Phillies Catcher Clay Dalrymple. 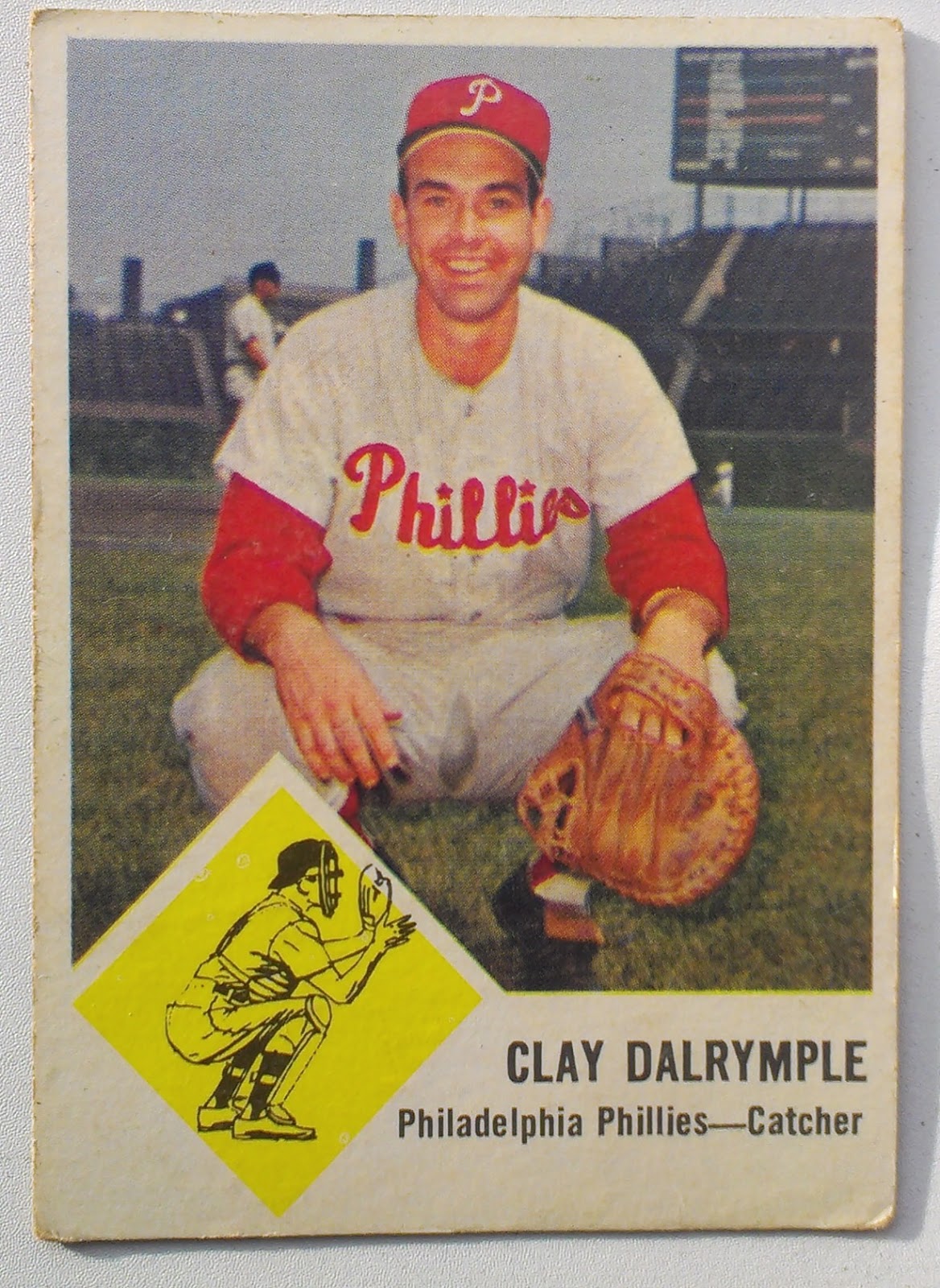 Prior to 1964 Dalrymple had a couple of decent offensive seasons as the Phillies full time Catcher. For the 64 campaign Manager Gene Mauch elected to platoon the left-handed Dalrymple with Gus Triandos. The part-time play was likely not the reason, but Clay developed a hitch in his swing and never really recovered. Prior to 1964 during his age 23 through 26 seasons Dalrymple hit 30 of his 55 career home runs. His career BA after those four seasons was .252. He would stick around the league for 8 more seasons as a defense first catcher and would never hit above .245 again.

His defensive reputation certainly appears deserved. For his career Dalrymple eliminated a very impressive 49% of base stealing attempts. Three times he led the league in Caught Stealing, Those same three seasons (61, 63, 65) he also led the NL in assists.

While he didn't get to the World Series with the 1964 Phillies, Dalrymple did get to play in the Fall Classic as a member of the 1969 Orioles. He was also a member of the 1970 World Champion Orioles, although he was not a part of the postseason roster. In 71 he was on the roster for the O's AL Championship squad but did not appear in any games.

Clay Dalrymple now 77 lives in Northern California, He has been married five times - and a Widower twice. His first wife, Celia, died of cancer near the end of his playing career.

Dalrymple stayed in contact with major league baseball in various capacities after his retirement as a player. His time with the Orioles include a stint as a color commentator. In 2005 Dalrymple submitted a heartfelt letter to the Baltimore Sun regarding the death of the towns legendary broadcaster Chuck Thompson - Dalrymple commented on the support that Thompson gave him as he began a new career.

1963 Fleer
1963 Fleer is a set that I am fond of and at various times have considered building. The abbreviated set is a mere 66 cards - Due to a legal action from Topps, Fleer was only able to produce a single series. The series is significant for containing the first Maury Wills card.

There are five Philies in the set that run from #50-54. If you want an easy to build Vintage Phillies team set, this may be the one for you, The cards can often be found for $2.

My only quibble with the set is the drawing of the catcher in the bottom left. He is clearly demonstrating poor form. You have to get that off hand behind your back, no need to get it busted by a foul tip.

I love the shot of Wrigley in the morning before the fans come in.

That's a great card. Not that I'm biased towards catchers or anything.

I think the one-handed catching style wasn't widely used until Johnny Bench in 1968.

Thanks Jim, It never occurred to me that could be a relatively recent development. In that case I am back on board with the illustration. And just another reason that Johnny Bench is a Hall of Famer.