As part of our 1964 Philles coverage you will get to see this Rookie Stars card a couple of times. 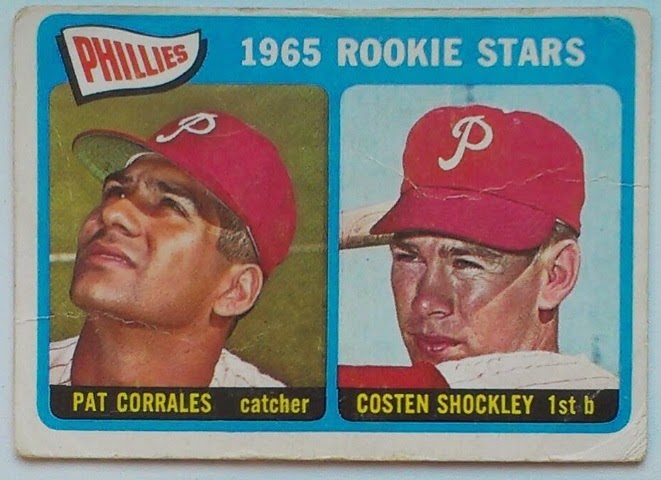 Today we look at the lesser known side of the card which belongs to Costen Shockley. As noted earlier in the week the Philly Show will be in Valley Forge the weekend of September 26-28th.While most of the autograph portion of the show is focused on No-Hit pitchers, there are a handful of additional guests that will be part of the festivities.

Costen Shockley was signed by the Phillies out of a nearby Georgetown DE high school. At the age of 22 he made his Major League debut with the 64 Phillies squad. He only got into 11 games with the team, during the off-season Shockley was involved in a trade to the Angels that returned Bo Belinski.

Shockley made the opening day roster for the Angels but struggled at the plate. In June the Angels decided to send Shockley to the minors an assignment he refused. That was it - at the age of 23 Costen Shockley was done playing baseball.

He returned to his native Delaware and worked in construction until his retirement in 2005. He has no regrets about moving on from baseball and his fortunate to have several family members that have played the game at several different levels. His son Costen Jr was a member of the 1981 Senior Little League championship team.

Costen Sr is a member of several local sports Halls of Fame including the Delaware HS coaches and Delaware Sports Museum HoF.