Madson got into 3 World Series games with the Royals and was credited with the victory in game 4 on Saturday Night.

Reds and Angels fans may not be as happy with Madson who battled injuries with both clubs and didn't make a major league appearance between 2011 and 2015.

For us Phillies fans it was a rare bright light in a bleak year and a reminder of better times which don't seem that far in the past. 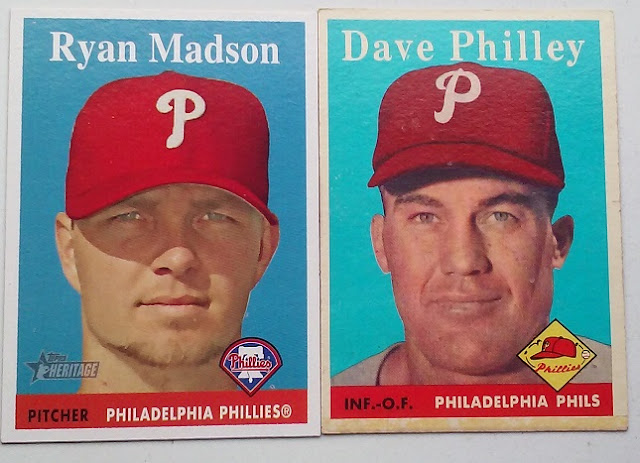 In the original 1958T set the #116 spot was occupied by Pinch Hitting specialist Dave Philley. The franchise is pretty much the extent of the player similarities. The Heritage recreation is pretty faithful, The different shades of blue and the logo change are the easiest things to spot. Also in the original 1958 Topps there are at least 3 different variations of the club nickname: Phillies, Phils and "Phils." with a period at the end.

The flip of the cards confirms the residents of both players as Card #116 in their respective sets, Near as I can tell the only other thing the two men have in common is a weight of 195 lbs.


Sources and Links
Baseball-ref
Posted by deal at 7:11 PM