Earlier today I woke up to the sad news that Tommy Hanson Had died. 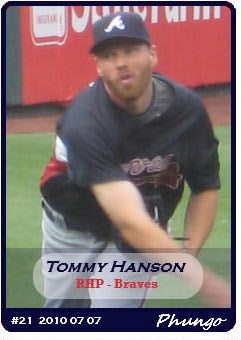 This picture was taking during BP On July 7th 2010. The Braves defeated the Phillies 7-5, Hanson did not play in the game. My enthusiastic game report can be found here. If I recall correctly the retiring Tim Hudson was working closely with the young Hanson that night.

Tommy Hanson earned one other blog mention - As a notable Braves prospect he made it into the 15 card Rookie Performers insert set of 2009 Heritage High Numbers.