Today we have the always enjoyable DayF of Cardboard Junkie at the plate to discuss all things Braves and beyond.

DayF, Comissioner of the 2010 Heritage Blaster Fantasy League, has once again provided us with a variety of insights and reminds us of why he is one of the more informative and funny card bloggers out there.

1) Jason Heyward, 21 Homers - Over or Under?
Twenty-one sounds about right, actually. He can get three and a half a month I think. I don't even care if he doesn't break twenty, he can do what he's doing right now and I'll be happy. I'll I'm really looking for from J-Hey this season is to be patient, draw walks, get on base and to get through the inevitable rookie slumps he's going to hit once pitchers start adjusting. He already had one with his streak of strikeouts including a Golden Sombrero against the Giants. He bounced back, made adjustments, started being more patient and now he's a legend again. The dude isn't old enough to legally drink, he's not going devastate the league quite yet. He's a hell of a lot better than the slabs of rotting meat that the Braves threw out there last April,that's for damn sure.One reason why I have absolutely no doubts that Heyward is the next big star in the league is because I got to see Jason play first hand in a Triple-A game at Gwinnett last year. Jason had played maybe one or two games in Triple-A after his call up and he already owned the place. He had a booming hit, made a great catch and throw in right field, was patient at the plate, stole a base and generally looked like he needed to be called up to the Show right then and there. The most ridiculous thing I saw was when he scored from second on a ground ball out! I know pretty much the entire country is completely sick of J-Hey-Hype but trust me when I say that Jason is the best prospect to come up since Pujols. I'm wishing I hoarded every Heyward card I could find instead of just being happy with finding one of each now.I never answered the question, did I? I'll be optimistic. He'll hit 22. I take the over. 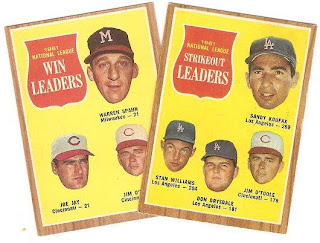 2) Should Sandy Koufax cards be more expensive then the cards of Warren Spahn?
Should James Dean movies be more expensive than Humphrey Bogart movies? They're both leading men, they both have a sexy, dangerous edge to them, the main difference is that James burned brightly for a short period of time while Humphrey was rock solid for decades.They're both good, they're both legends and if people want to buy up all the copies of Rebel Without a Cause for $50 a pop and leave The Maltese Falcon in the $10 bin for me, I don't really mind all that much.The fact is there are a a lot more Dodger collectors out there than Braves collectors, and Koufax also has the true star quality going for him. Spahn is the best Lefty ever, but he was more workman about it. I certainly don't mind picking up vintage Spahnnies for under 10 bucks.

3) Topps has now released 10 years of Heritage - looking back are there any inserts/subsets they have dropped you would like to see return and are there any inserts that you believe need replaced.
Topps has remained very consistent with their Heritage insert sets.The Chrome Parallels, Then and Now, New Age Performers, Real One Autographs and Clubhouse Performers inserts have been in every single set if I'm not mistaken. They had an insert called Classic Renditions with modern players in classic unis in 2001 and 2002, but in 2003 they're placed it with Flashbacks which is still in the 2010 set. There have been some weird stuff like a Mantle Home Run countdown in 2008 and2010's Ruth Chase and the somewhat useless News Flashbacks, but other than that the set is the same as it's always been.Something I'd like to see return are the variation cards that fall at the same rate as the short prints. I hate the super short prints with a passion mainly because I used to be able to get a Rafael Furcal card with a night background or a Johan Santana card with a Washington hat variation as easily as anything else. That has sort of come back this year with the 1:72 Dice Back variation. They are tough, but I've already pulled two and it's a real cool concept. Something that can go away is the news flashbacks. there's maybe one good one a year (space monkey!) and they are mostly a bummer to pull. One thing I'd like to see in 2011 Heritage is a one per pack "Baseball Bucks" insert set. Topps inserted paper play money with players' pictures on them in 1962and it would be nice to have that set be easy to collect unlike the cool but scarce Stamps from this year.

4) who is your Favorite Jones not named Chipper

MY FIVE FAVORITE JONESESES AFTER CHIPPAH(and no, Andruw ain't one of 'em)

#3 John Paul Jones - I got the Led Zep box set back when it first came out.

AND THE GREATEEST JONES OTHER THAN CHIPPAH IS:

#1 Terry Jones - Terry might actually beat Larry to be honest. 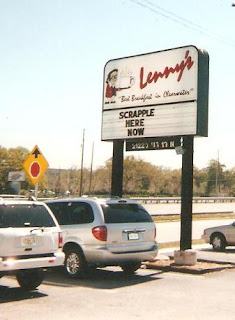 5) As Commissioner of the 2010 Heritage Blaster Baseball League, I ask you to Defend Grits.
Defend grits? As in the southern type breakfast mush that you get with your eggs, bacon and scattered covered and smothered at the Waffle House? Those kind of grits? Well, I don't see them as being any weirder than any other sort of odd regional delicacy like lutefisk in Minnesota, or fried brain sandwiches in Indiana, or poutine up in the Frozen north or *ahem* scrapple... It's just redneck polenta, nothing more, nothing less.It's a porridge like oatmeal or cream of wheat, really, just made out of corn. While oatmeal is hearty, and cream of wheat is smooth, grits are just sort of gritty, hence the name. They're good though and while oatmeal and cream of wheat are good with sweet stuff like syrup and cinnamon and fruit and cream, grits are good with more savory flavors.I love mine with any combination of butter, cheese, bacon bits or black pepper. If you're ever on the South Carolina coast find a place that has real low country shrimp and grits with fresh local shrimp,slow cooked grits and a spicy tomato sauce... pure heaven.If you're talking about gritz76, the guy who runs Project '62, well, I can't. There's no way I can defend a Cubs fan.

Cardboard Junkie Goes 4 for 4 with the J-Hey Question remaining open. And despite what Heyward did to the Phils last night we will toss in an extra point for going the extra mile and hooking us up with the Morticia video. Cardboard Junkie 5 points with one pending.

To check out a previous Phungo 5 with Brian from 30-Year old Cardboard click here
Posted by deal at 7:21 PM