Phungo 5 with a Giant Blog

The Phils are out on the west coast for a couple of late night games with the San Francisco Giants, and we visit with Matt who hosts A Giant Blog, as well as a few other blogs that follow the 1976 season.

Your a Giants Fan in Arizona, do you get to see the Giants play in Phoenix often?
I try to get down to Phoenix to see the Giants at least once a year. I live about 180 miles northeast of Phoenix so it's kind of hard to see more than 1-2 games a year. When I grew up in the Phoenix area I saw the Giants' AAA team (Phoenix Giants/Firebirds) about 5-10 times a year. The Giants also train in Arizona so I was able to see a few of their spring training games

One of your blog projects covers the 1976 Baseball Season via Strat-o-Matic. Have you been disappointed by the Giants performance? and how the heck are the Mets 5 games in front of the Phils as you near the end of July?
Right now the Giants are a game ahead of their actual pace in my strat replay so far (I'm in late July right now). I didn't expect much out of the Giants in this replay. They were about five games below pace in mid-May but they've been playing better lately. The mid-1970s were the low point for the Giants in San Francisco. It seems like every year they were rumored to be moving to Toronto or St. Petersburg or something like that. They got rid of so many good outfielders -- Bobby Bonds, Gary Matthews, Garry Maddox, George Foster, even Dave Kingman.

The Mets are doing it with great pitching. Jon Matlack is pitching so well that he may end up taking the Cy Young Award away from Tom Seaver. Jerry Koosman is being overshadowed by the other two, but he's pitching great too. Right now the Mets are 8 games ahead of their actual pace and the Phillies are 4 games behind their actual pace. I keep waiting for the Mets to drop but so far they've hung in there. The closest the Phillies have come is 2 games behind in late June.

3) What are the top 3 reasons the Giants have not won a World Series since moving to the Bay area?
The Giants really should have won at least one WS in the sixties, but they always seemed to be one or two players away. They had middle infielders who didn't hit much and they didn't have very good on-base guys at the top of the order.

I never lived in the area, but I have to think that the coming of the Oakland A's in the late sixties had to have been a detriment to the Giants' fortunes. I'm not convinced that the Bay Area can support two teams.

The Giants got overdependent on Barry Bonds and his departure left a huge hole in their offense.

What number should the Giants Retired that has not been?
Monte Irvin #20
Will Clark #22 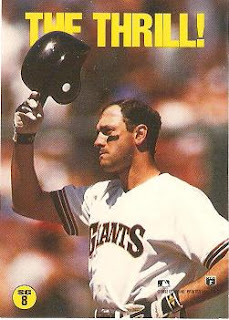 1992 Donruss Leaf Spirit of the Game #SG8 Will Clark


As a history fan, Do you have a favorite History related card or insert set?
There are a lot of history-related inserts that I like. I like the Conlon sets, but I wish they would have changed up the design from year to year. Topps did some great subsets like the MVP subset in 1975 and the Sporting News All Star subset in 1976. I would like to see Topps do a team history 132-card set every year. They could do some cards about the history of the franchise, some cards depicting the all-time best players on the team, and some cards that show the most interesting / best cards that Topps made of each team over the years.

Phungo 5 Box Score
Thanks to Matt for helping us out with the Giants. I am a bit shocked that Monte Irvin's number is not retired by the Giants. Granted he played for them in New York rather than San Francisco - but he is a member of the Hall of Fame, and was also on the Giants 1954 World Championship team.

I am going to give a 5 out of 5 here, Nice Call on both Irvin and the Thrill, Also good to see the 1975 MVP set get some love. However, I may have to withdraw one of those points if the Mets beat out the Phils for that 1976 division title.

Looking Back
If you want to look back at a prior Phungo 5 with Cardboard Junkie click here.
Posted by deal at 9:39 PM

Email ThisBlogThis!Share to TwitterShare to FacebookShare to Pinterest
Labels: A Giant Blog, Giants, Phungo 5, Will Clark

I'm managing all of the Phillies games myself. The computer is managing the Mets games. I HOPE I can outmanage a computer. :)